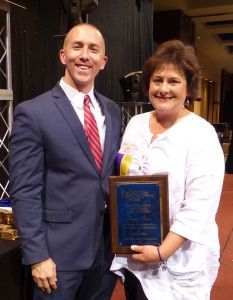 Ponson, the college’s coordinator of Student and Program Outreach, and a HOSA Region I advisor, received the accolade during the 2017 HOSA State Leadership Conference held April 6-9 in Orlando. Lifetime membership is bestowed on individuals who have been active members and who are or have participated in HOSA in a professional capacity.

“The HOSA Honorary Lifetime Member Award is an honor and I am proud to be a part of the HOSA organization,” said Ponson who has been involved with the organization since 1997 when Pensacola State hosted the Region 1 HOSA Fall and Spring Leadership Conference.

“We packed Room 3000 which was considered a large auditorium at the time with 75 students. Now the organization has outgrown the Warrington campus and has been held in the Jean and Paul Amos Studios on the Pensacola campus with 745 members from Region 1.”

Jim Van Allan, chairperson of the Florida HOSA Alumni and Professional Association, described Ponson as a “spotlight” before presenting her with the award.

Along with an increasing membership, Region 1 HOSA has grown to three membership levels – Middle, Secondary and Post-Secondary – where students gain experience in team building and learn confidence by working hard. Also, members are recognized for their hard work and gain invaluable life skills such as public speaking and communication.

Ponson is quick to acknowledge the impact HOSA has had on her life.

“It has allowed me the opportunity to work with students from Pensacola State and other schools in our region that extends from Escambia County to Bay County,” she said. “And it has allowed me to help students make positive decisions about their future health careers.”

To current and former HOSA members, Ponson is so much more than just a mentor.

Zac Hastings, a former HOSA member who now works at Select Therapy – PSC on the Pensacola campus, said she encouraged him to reach for the stars.

“Mrs. Ponson took me in as a post-secondary member and pushed me into taking on roles that I wasn’t even sure that I could take,” said the Pensacola State alum. “She helped me build confidence in myself with public speaking, leadership roles, and mentoring other young HOSA members. Mrs. Ponson had always been a great advisor in many aspects and I was honored to be a part of her post-secondary chapter.”

Hastings added the skills he acquired as a HOSA member have helped him professionally.

“By being an active member, it helped me improve who I am as an individual. The leadership skills and knowledge that I gained as a member opened many new doors for my career and success. I encourage all young high school and post-secondary individuals who have an interest in healthcare to invest in themselves and be a part of HOSA,” he said.

“Mrs. Ponson believed in me and always encouraged me to be the best at whatever I set out to do,” he said.

“Jennifer has helped me with HOSA by pushing me into the right direction in Health Education. She strives to make you become a better person, letting you know that you can do whatever you like in life. She has helped build my leadership skills and self-confidence,” Hoang said.

Ponson, who also serves on the Florida HOSA Board of Directors, said she looks forward to continuing to work with HOSA.

“Watching students succeed is such a rewarding part of my position with Pensacola State College,” she said. “And, HOSA has been a vehicle to promote hard work and that coupled with student recognition gives members the confidence that allows them to be successful in whatever path they choose.”