President Ed Meadows raised a glass on Thursday to toast donors and supporters who have helped the College raise more than $6.2 million in an ambitious “Your Community — Your Legacy” capital campaign.

That’s 56 percent of the $11 million campaign goal that already has been met. And though the campaign began its quiet phase in December 2018, it wasn’t until Thursday’s press conference at the new Baars Building on the Pensacola campus that the campaign was unveiled to the public. The campaign will fund workforce development, student scholarships, a conference center and College growth and expansion.

“The College turns 73 years old this year and this marks the second capital campaign in our history,” Meadows said at the press conference, which was attended by Florida College System Chancellor Kathryn Hebda, Pensacola Mayor Grover Robinson IV, and numerous PSC Foundation Board of Governors members and PSC donors. “At the halfway point, we have already raised more than was raised in our first campaign almost 20 years ago.”

• A $140,000 donation gifted to the College from the trust of former PSC math instructor Ralph Ruyle, who died in 2014, and his wife Libby, who passed in August 2020. The couple were members of the PSC Bell Tower Heritage Society, which is a legacy giving program. The donation will endow a math scholarship and a math lab in the Baars Building that will be named for the Ruyles.

• Pensacola businessman Donald “Donnie” McMahon III has gifted $250,000 to PSC that will support student cybersecurity or computer-based degrees. McMahon is a member of the PSC Governors Emeriti, a distinction he was honored with in recognition of his longtime support of PSC and his lengthy tenure as a member of the PSC State College Foundation Board of Governors. In 1999, McMahon established the McMahon Endowment to support a broad range of PSC students. PSC will name its new Cybersecurity Program and Center in McMahon’s honor.

● Workforce program development: $2,432,215 of the $4,050,000 goal has been raised. The funds will help construct the Baars Technology building; strengthen regional resilience of the Nonprofit Center for Excellence and Philanthropy; support expansion of Health Sciences programs to meet current and future workforce demands; and prepare students for the workplace through internships, co-ops and apprenticeships.

● Student scholarships: $1,512,714 of the $3,089,108 goal has been committed. The funds will aid career and technical education, first-generation, health sciences and veterans/relatives’ students. It also will ensure future opportunities for named endowments.

Hebda paid tribute to PSC’s donors for their support of the College.

“This is a wonderful occasion to mark the work of people who love a beloved College,” she said. “Many of the dollars raised will go directly to student scholarships. And those scholarships change lives.”

McMahon has been a supporter of the College for decades. After graduating from FSU, he came to then-Pensacola Junior College for a 300-hour insurance course.

“I’ve always been motivated by this College and its mission,” McMahon said. “And its commitment to workforce development is just so important. I’m very excited about the cybersecurity program at PSC because there are thousands of good-paying jobs open in cybersecurity. Those are the kinds of jobs we need in Pensacola.”

Capital campaign chair Gordon “Flash” Sprague said he is confident that the $11 million goal will be reached within two years.

“Every campaign has a beginning and that beginning can takes years to get going,” Sprague said. “Many people will wait to see if any money is raised before making a commitment. We’re halfway there and we will do it.” 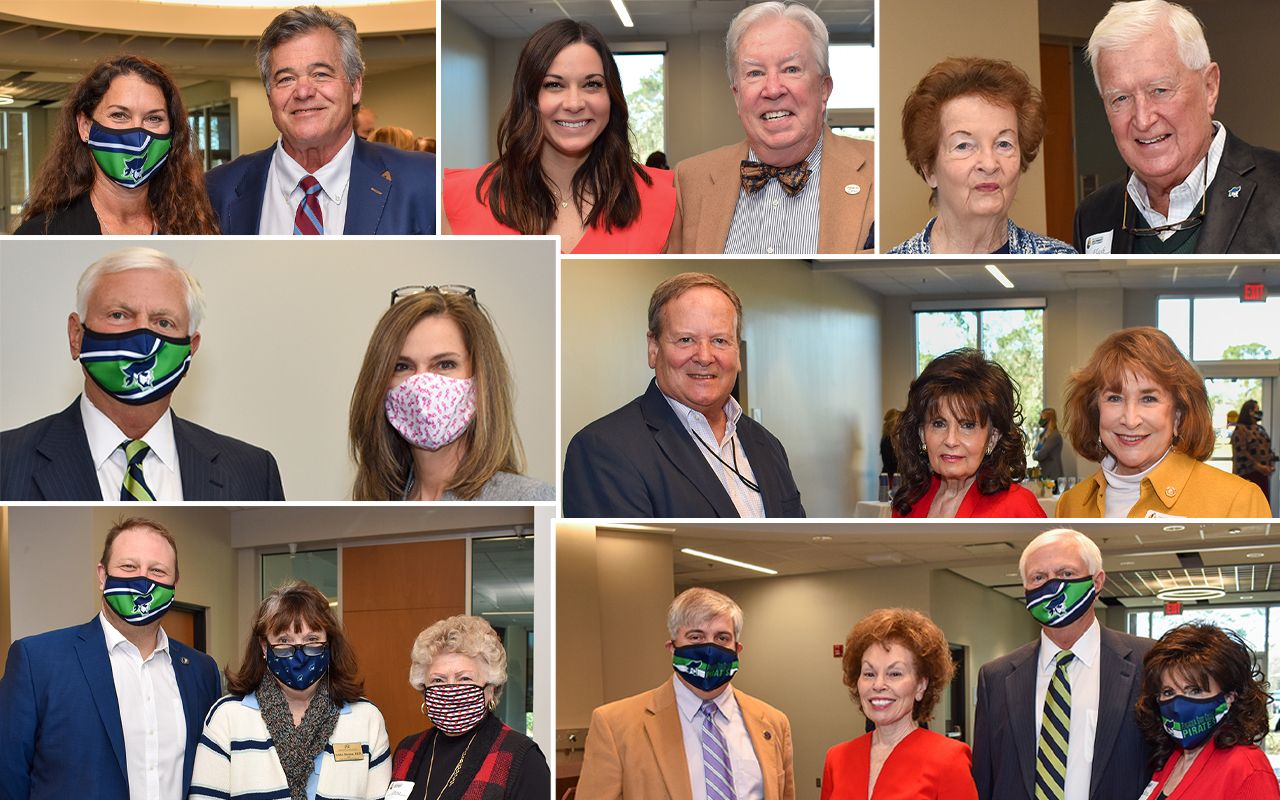