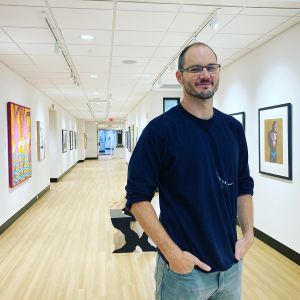 Like many young artists, Jason Pinckard was inspired by cartoons, comic books and video games. As a child, he would draw all the characters he liked to watch and play on video games, from “Mega Man” to “Looney Tunes” characters.

His affinity with art would continue at Pace High School, where, as a student he would expand his drawing, using color pencils and experimenting with various techniques, expanding his use of light and shadow.

Pinckard’s interest in art never faded or dulled, and today, he is not only a professional artist himself – largely working in digital photography and sculpture – he is surrounded by the art of others. He became PSC’s new Gallery Coordinator on July 1, replacing Michelle Schulte, who recently left the position. He will oversee curating and designing exhibitions for the PSC Switzer Gallery and Lamar Studio in the Anna Lamar Center for Visual Arts on the Pensacola campus.

“This is such a beautiful place,” Pinckard said of the Anna Lamar Center and its galleries. “It’s amazing, quite honestly.”

He was previously Gallery Coordinator of the Carolyn Wilson Gallery at the University of South Florida. His wife is a local schoolteacher.

“The passion for me is exhibition design and curation,” Pinckard said. “A lot of the work I did (at the Carolyn Wilson Gallery) was with emerging artists. I know it sounds cliché, but I really enjoy helping an artist’s vision come true. An exhibition is a huge deal for an artist, especially the emerging ones or those who aren’t guaranteed exhibition space all the time. I want to help them make their exhibits beautiful and great and successful for them, but also for the public.”

“He comes from a really great background working at the University of South Florida,” she said. “He has great ideas for future shows, especially at the Lamar Studio, which is so massive. He’s very community oriented and wants to develop relationships in the community that will support our exhibitions and mission.”

Pinckard said he wants PSC’s galleries to be “an anchor in Pensacola.” He hopes that the exhibits the College brings in will inspire others and maybe lead them, eventually, to become PSC students.

“There’s a responsibility to make sure that this place is as special as it can be for the public,” he said. “This could be an anchor for art in Pensacola and bring people to come out and learn and engage with art.”