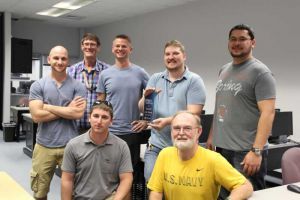 Gulf Coast State came in second in the competition and UWF finished in third place.

Pieknik, the team’s captain, said the entire team prepared for the competition and it paid off.

“We had to defend an entire network from an unknown number of cyber threats because that is what you do in the real world. It was pretty intense 4 ½ to 5 hours of competition but we’re glad we were able to prevail and come out on top,” he said.

He added the entire team learned from the competition.

“It was a real learning experience for us; we put in a lot effort for this event and are now better prepared for CyberThon 2017 in January,” he said.

CyberThon 2017 is set for Jan. 20 through 27 at the Naval Flight Academy and National Naval Aviation Museum in Pensacola.

Robert Pratten, Pensacola State’s assistant professor of the Information Technology Programs, said he is extremely proud of the team.

“This is a great group of guys who really worked hard and prepared for the ITEN Wired Summit,” he said. “They’re all capable and I know they will remain great students in the classroom.”