The Pensacola State College chapter of the Association of Florida Colleges was named the 2016-17 Chapter of the Year during the 2017 Annual Meeting and Conference held Nov. 1-3 in Palm Harbor.

The Chapter of the Year award is presented based on documentation of functions and events from the 16 categories relating to the goals and mission of AFC. Pensacola State was chosen as the top chapter of the year out of 21 chapters which submitted an entry. 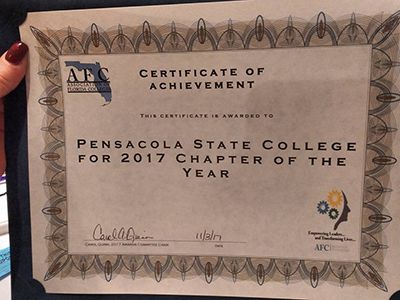 Pensacola State also earned a Platinum Chapter ranking ─ the highest ranking bestowed upon a chapter. The chapter received a Membership Growth Award based on the membership increase May 2016-May 2017.

Juanita Scott received the Honorary Life Award, a recognition determined by the state AFC for outstanding service to the organization

Carol Quinn was named Outstanding Board Member of the Year, an award and recognition determined by the state AFC for outstanding service as a board member among all state officers to commissions, committees and state officers

Pensacola State chapter members also received numerous other recognitions at the conference. They include:

Throughout the conference, Pensacola State members assisted with assigned duties in the exhibit hall, took photographs, manned the chapter table, assisted in the silent auction area, made donations to the service project, and participated in the Friday morning Fun Run.