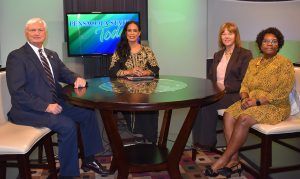 Pensacola State College’s “100 for 100” program volunteers have raised $16,120 during the current campaign to raise money for student scholarships.

If history is any indication – and it is, or we probably wouldn’t teach it here – that figure will rise after the WSRE-TV program “Pensacola State Today” features a segment on the African American Memorial Endowment Scholarship and the Dr. Garrett T. Wiggins “Live Your Dream” scholarship and its recipients.

The one-hour episode will air at 3 p.m. April 2 and at 1 p.m. April 3 on WSRE-TV. Three scholarship winners – Shantora Grant, Shelby Witherspoon and Jaisiah Rivera – will appear on the program.

PSC held a special ceremony on March 4 to honor the scholarship recipients.

To fund the two scholarships, the College launched its “100 for 100” campaign. Volunteers set a goal for 100 people to donate $100 each with an aim of $10,000 in contributions for scholarships.

Last year, $15,865 was raised to fund current scholarships. That included $3,000 that was raised when “Pensacola State Today” featured an episode about the scholarships after the 2021 special ceremony.

“After the (2021) show premiered, we received more donations,” said Dr. Rameca Leary, the College’s Coordinator of Diversity Initiatives and the host of “Pensacola State Today”. “We hope the same thing will happen this year.”

Though the African American Memorial Endowment Scholarship is, as the name implies, endowed, the Dr. Garrett T. Wiggins “Live Your Dream” Scholarship is not. At least, not yet.

There are plans to endow the Wiggins’ scholarship in the future, but details are still being worked out.

“We’re trying to push, push, push for the endowment,’’ Leary said. “We want this important scholarship to continue in perpetuity.”

Wiggins was the president of the all-black Booker T. Washington Junior College when it merged with then-Pensacola Junior College in 1965. Wiggins then served as the PJC Director of Research until his retirement in 1969.
The Dr. Garrett T. Wiggins “Live Your Dream” Scholarship was established in 2005.

The African American Memorial Endowment Scholarship started more than 20 years ago to honor Dr. Ellen Lett, a beloved PJC English instructor. A scholarship was created in her name. Later the scholarship’s vision was expanded, and the name changed to pay tribute to deceased African American employees at the College.

To donate to the scholarship funds, go to https://foundation.pensacolastate.edu/opportunities-to-support-psc/scholarships/.