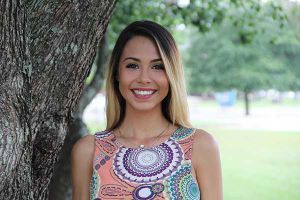 For the next two months, Pensacola State College student Kaitlin Santiago will rub shoulders with the movers and shakers in Washington, D.C.

Santiago, 21, has been selected as a spring semester intern for the Florida House Internship Program. During the eight-week program, she will gain invaluable experience at Florida House, the only state embassy in the nation’s capital. The Northwest Region of Florida House is providing a $6,000 scholarship to help cover expenses.

The program includes four days a week assisting the director of Florida House in its mission of showcasing education, business, arts, culture and hospitality. On Thursdays, Santiago will have the opportunity be on Capitol Hill where she will shadow Matt Gaetz, District 1 representative, along with other members of the Florida congressional delegation.

“It is a tremendous opportunity for me,” said Santiago, a sophomore majoring in philosophy and government. “It’s a chance to see firsthand how our federal government operates and witness our congressional representatives at work.”

The internship won’t be Santiago’s first experience in the world of politics. In April 2016, she was elected the Florida College System Student Government Association president. Campaigning on a “Bridge the Gap” platform, she defeated two other candidates for the one-year term that ends July 1.

During her freshman year, Santiago also was Pensacola State’s SGA president and founded Creative Solutions Committee, an entity that brings officers from college organizations together to share ideas and promote upcoming activities.

“Kaitlin is an amazing student and a natural leader. She has stepped up to serve in student government not just at Pensacola State but with the Florida College System as well,” he noted. “It just makes sense that her next step would be to serve in Washington, D.C.”

He added Santiago will learn so much during the internship program.

“It brings alive our nation’s foundation and political process in a way that lectures and textbooks can’t match. We are indebted to the Northwest Florida Region of Florida House for providing scholarships that make this experience possible,” he added.

Santiago arrived in Washington, D.C., on Jan. 2. The internship will run through Feb. 28.

After Pensacola State, Santiago said she plans to continue her education, and eventually attend law school.

“I want to pursue a career in public service, maybe even becoming a mayor or another elected official one day,” she said. “Post-secondary education and training is essential to our success as a nation and I want to help evolve online learning, create interactive education tools and expand virtual reality learning.”

During her stay in Washington, D.C., Santiago said she will attend the inauguration of President-elect Donald Trump on Jan. 20, and do some sightseeing.

“I’m so excited to be able to witness such an historic event as a presidential inauguration,” said Santiago, who is a college inauguration liaison for the Women’s March on Washington.

“Washington is a beautiful and historic city and during my free time, I plan to visit the Smithsonian Museum, Library of Congress, and Folger Shakespeare Library, just take in everything…”

Santiago is the daughter of Ramon and Natalie Ledesma of Milton. She has three siblings – Cameron Ledesma, Jaden Ledesma and Mackenzie Ledesma.