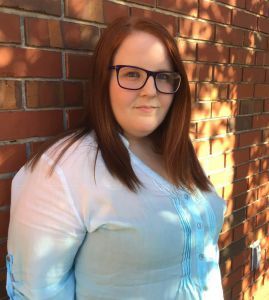 The Pensacola State student has had a few hard knocks in her 27 years.

“My life is like a series of unfortunate events, I swear…,” she said.

Illness took a toll on her school attendance and she fell behind a year in high school. But her principal saw her potential.

“He said, ‘You made straight A’s and you missed, like, a hundred days last year. I need you to take this test for me,’” described Greene, adding that after she tested out of high school, the principal encouraged her to get her GED diploma and go to college.

She moved into the dorm as the resident assistant at Jones County Junior College in Ellisville, Mississippi, a week before she turned 17.

“They called me the ‘Dorm Baby’ because I was the youngest person there,” Greene said.

A few weeks later, she met Duncan Greene. A whirlwind romance lead to an engagement, marriage and a baby. But with the baby came more health complications and Greene had to quit school after two semesters. Her husband’s job subsequently took them to several locations in Mississippi, Alabama and Louisiana.

Greene, the first person in her immediate family to attend college, could have become a statistic, but instead, she chose to become a strategist. Greene went back to school in 2013, attending classes at three different community colleges in Mississippi. Then in 2015, the couple moved to Pensacola and Greene discovered Pensacola State.

“I went to a lot of colleges, but this (Pensacola State) has been the best experience,” said Greene, who has been able to take all of her classes online. “That’s been the best part of it all, just not having to stress about having to go to school and be exposed to all the germs and stuff.”

Greene earned an associate degree in business administration in May 2018, but she isn’t stopping there. She will graduate in summer 2019 – having completed the Marjan Mazza Bachelor of Applied Science in Business and Management program.

“A bachelor’s degree is a big deal for anybody, but the fact that I’ve had health problems, I’ve had two kids, we’ve had to move all these times and I’ve still maintained that GPA …,” said Greene, who currently has a 3.93 grade point average.

Due to her academic performance, Greene was inducted into Sigma Beta Delta, International Honor Society for Business, Management and Administration last fall.

Greene said she has had several exceptional instructors during her time at Pensacola State and mentions her English instructor, Raja Atallah, along with her business instructor, Brian Ward, as being fair-minded when it came to allowing her to work around her hospitalizations.

“Dr. Ward is my favorite,” she said. “He wrote me a recommendation letter for my master’s. I’ve already been accepted to UWF.”

Green was accepted into University of West Florida’s Master of Business Administration Program at the end of November.

With Sigma Beta Delta and Marjan Mazza scholarships, along with several others she has earned, Greene said she has been able to finance her education with very few out-of-pocket expenses. She also supplements her family’s income by working as a freelance photographer and said business is booming.

Greene and her husband also are raising their children – daughter, Aubrey, who is 4, and 9-year-old Bentley, who has special needs. Greene doesn’t want sympathy, but she hopes her story will inspire others.

“You can’t let your circumstances define you,” she shared.

There is little doubt that from here, Greene will get where she wants to go. 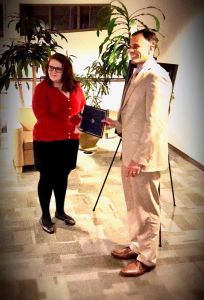