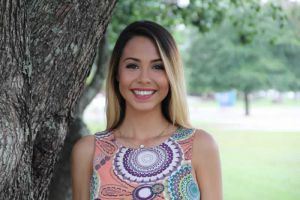 Santiago, a sophomore majoring in international business, was recently elected FCSSGA president. Campaigning on a “Bridge the Gap” platform, she defeated two other candidates for the one-year term that began July 1.

During the 2015-16 academic year, Santiago, 21, was Pensacola State’s SGA president. Her tenure included founding the Creative Solutions Committee – an entity that brings officers from various Pensacola State organizations together to share ideas and promote upcoming activities and events.

The 2013 Milton High graduate also is an intern for Pensacola Mayor Ashton Hayward. After earning her advanced degrees, Santiago said she wants to eventually pursue a career in public service.

As FCSSGA president, Santiago’s responsibilities include acting as a liaison and an advocate for students. One of her primary goals is to ramp up the organization’s social media.

“Having a vibrant social media presence is a necessity for young people today. As Florida College System students, we are so spread out and social media provides a way for us to connect with each other – no matter where we are,” she said. “We’re able to communicate and share common ideas so our voices will be heard. Students have a lot of the same issues and they don’t realize how common these problems are. Social media will allow us to reach a broader audience, raise awareness, build support groups and develop solutions.”

She is the daughter of Ramon and Natalie Ledesma of Milton and has three siblings: Cameron Ledesma, Jaden Ledesma and Mackenzie Ledesma.