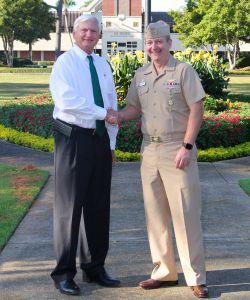 Pensacola State College has been named one of Military Times’ 2020 Best for Vets Schools.

The college was 100th among 134 ranked four-year universities and colleges in the recently-released list. More than 600 postsecondary institutions submitted data to Military Times for the rankings, which are the result of a comprehensive survey of veteran and military student services. Academic achievement rates and other factors that make colleges and universities a good fit for service members, veterans and their families also are considered in the list.

Pensacola State was ranked based on fall 2018 data when the College had 960 active duty and veteran military students enrolled in courses. Those students had a 72 percent retention rate, and active duty and veteran students had a 45 percent graduation rate. The College also scored well in indicators measuring how thoroughly an institution addressed potential gaps in tuition costs covered by the GI Bill.

“None of our Post-9/11 GI Bill recipients incurred any school loan debt,” said Michael Johnston, Pensacola State’s executive director of institutional research. “The GI Bill Cap coverage metrics rate how well schools reduce or eliminate out-of-pocket tuition costs for Post-9/11 GI Bill users. At PSC, it is part of our mission to provide a quality but affordable education to all of our students. We are especially committed to our military and veterans populations and their dependents who all qualify for the Post-9/11 GI Bill.”

In July 2017, federal legislation was passed that required all public schools to offer in-state tuition to eligible GI Bill users. In order to have all tuition costs covered by the benefit, private schools had to stay under the $23,671.49 cap, Johnston added.

“Almost 70 years ago, Pensacola State was founded, in part, to meet the educational needs of veterans returning from World War II, along with our region’s active duty service members and their families,” said PSC President Ed Meadows. “We are proud of our decades of support for military men and women, and we are – once again ─ honored to receive this national recognition.”

The accolade comes as no surprise to Rob Gregg, director of the college’s TRIO Veterans Upward Bound program.

“Being located in an area with a large veteran and active duty presence, Pensacola State College is a perfect fit for our military students and their dependents,” Gregg said. “The college has a great relationship with the local military and all of our campuses are easily accessible to active duty, veterans and their families, no matter where they are stationed through traditional and online courses.”

“They love it because while we are a federal program that can help them prepare for any college or university, Pensacola State’s culture is so accommodating,” Gregg said. “It is usually the college many veterans choose.”

“I plan to graduate in May 2020 and then transfer to UWF (University of West Florida) for my bachelor’s and master’s degrees in marine biology,” said Hammond, who served more than 20 years in the military. “I decided on PSC because it was a good use of my GI Bill funds and the Veterans Upward Bound Program.”

Hammond earned a maximum score of 150 on his Postsecondary Education Readiness Test (PERT) for math.

“Janet (Mayhew), a VUB tutor and instructor, helped prepare me for the exam. The first time I took it, I made score of 101 but with her tutoring I was able to raise my score by 49 points. Janet was amazing, I wouldn’t have been able to earn such an impressive score without VUB or her help,” he added.

According to Military Times, the rankings were more competitive this year with Four-year Schools, Two-year Schools, Career and Technical Colleges as well as Online and Nontraditional Schools participating in the survey.

“Of the hundreds of schools that applied, fewer than half received the Military Times Best: Colleges designation this year. Only the best made the cut,” said George Altman, Military Times editor in charge of the rankings, in a prepared statement.

Military Times’ annual survey asks colleges and universities to meticulously document an array of services, special rules, accommodations and financial incentives offered to students with military ties and to describe many aspects of veteran culture on campus. The organization also factors in data from the Veterans Affairs and defense departments, as well as three U.S. Department of Education sources: the IPEDS Data Center, College Scorecard data and the Cohort Default Rate Database.

Rankings are published in Military Times magazine and at MilitaryTimes.com, ArmyTimes.com, NavyTimes.com, AirForceTimes.com and MarineCorpsTimes.com.