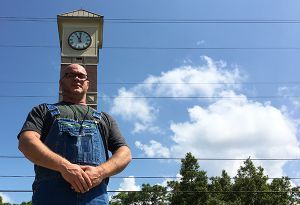 Stephen Walls became a published poet just to get his teacher off his back.

Walls, a Pensacola State College GED student, had written a few poems for class, but when GED instructor Linda Lewandowski urged him to enter his poetry for publication in a literary compilation, he balked.

“She loved my poetry and encouraged me, but I didn’t really want to do it,” said Walls, a single father who hopes to earn his GED within a year. “But she’s persistent with me, and I love that about her because she pushed me. So I said I’d do it just to hush her up.”

Walls is one of three Pensacola State GED students who are featured in The Florida Literary Coalition’s “The Path Taken,” which publishes poems and stories from adult learners from across the state. The writing of Bussararat Chesnutt and Brooklyn King also were included in the publication, which features contributions from more than 100 adult education students.

Lewandowski said this is the first time that PSC students have been featured in the publication.

“I’ve never had any other students who were published before,” said Lewandowski, who submitted the three students’ works for consideration. “We’re really excited about this. So many of these students have not seen academic success, so to be published like this is awesome. For them, it’s encouragement, and proof that they can succeed academically and in life.” (Speaking of success, King recently finished her GED and will soon start classes at PSC.)

The Florida Literary Virtual Conference is scheduled for June 25-26, and Walls has volunteered to read his poetry during the conference.

“I’ve always been a bit poetic,” said Walls, who homeschools his daughter while attending to his own academic needs. “I learned that women love poetry. But I don’t write mushy stuff. I try to stick to nature.”

To read the PSC students’ selections, go to https://floridaliteracy.org/books/thepathtaken2020.pdf.

PHOTO: Stephen Walls is one of three Pensacola State GED students who are featured in The Florida Literary Coalition’s “The Path Taken,” which publishes poems and stories from adult learners from across the state.