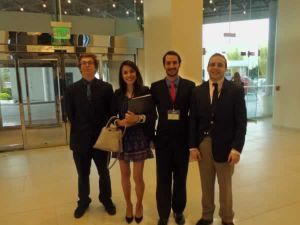 Andrew Stahlecker, John Seward, Kaitlin Santiago and C.J. Kennamore were the Pensacola State delegates at the conference held Oct.14 through 15 in Orlando. Doug Mock, Pensacola State history, languages and social sciences instructor, and a political analyst, is the delegation’s adviser.

The Florida Model Legislature allows students from all over the state to serve as lawmakers in a simulation of a State Legislature. Participants serve in the state House of Representatives or Senate where they write, debate and vote on legislation while representing the people of their legislative districts.

Stahlecker ─ who won a “Distinguished Senator” Award ─ said he walked away from the conference with a much deeper understanding of how the Florida Legislature works.

“I was also able to test my own ability to perform the role given me. I was reminded of why I don’t like party politics and what it has forced our whole political system to become, especially in light of the current presidential election. However, the Florida Model Legislature Conference has rekindled an earnest interest in our state level government to the point where you may be seeing my name on a ballot in a few short years,” said Stahlecker ─ one of only three senators rated “outstanding” or “distinguished” at the conference.

Seward, Santiago and Kennamore also did outstanding work. Santiago was in the leadership of the Democratic Party, and Kennamore served as vice-chairman of his committee.

Florida Atlantic University – the only institution rated outstanding – was the conference’s overall winner. Pensacola State was the higher ranked of two institutions that won a “Distinguished Delegation” award.

Historically, Pensacola State does well at the conference. In 2015, John Seward was recognized as a “Distinguished Senator,” and the college received the “Distinguished Delegation” award.

Mock said the conference can really enlighten young adults about the law-making process.

“The Florida Model Legislature is an outstanding opportunity for our students to gain an in-depth understanding of important issues that are currently facing both legislators and voters in the state of Florida,” he said. “Perhaps just as importantly, participants – broadly speaking – learn skills such as negotiating and seeing issues from another’s perspective and – speaking specifically – the difficulties, hurdles and processes involved in taking an idea and making it into a law.”

“The conference also meant a great deal to me as the FCSSGA president. Not only was I able to learn incredibly vital legislative lessons, but I also had the opportunity to spend time with my college throughout this process, and get to meet with students from across the state,” she added.