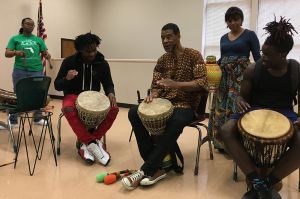 At the beginning of the Feb. 17 Pensacola State College African American Student Association meeting, members named African Americans forefathers and foremothers who had inspired them.

Because the chapter, made up mostly of young students born as beneficiaries of the civil right movement and the grit, determination and righteousness of those who preceded them, is determined to remember the past.

It’s no surprise then that the Pensacola State chapter is a partner to and host of the Santa Rosa Community Remembrance Project Coalition, a group that is trying to recognize and document the African Americans who were lynched in the county between 1875 and 1950.

“One of the lynchings happened one block away from the (Milton) campus,” said chapter co-advisor Tonie Anderson-Steele, who has been involved with the PSC African American Student Association since 2004. “They are our ancestors. And we still need to face that history, no matter how horrible and traumatic it is. It’s still our history.”

The first meeting of the Santa Rosa Community Remembrance Project Coalition took place in January at the college’s Milton campus.

The Community Remembrance Project Coalition is a partnership with the Equal Justice Initiative of Montgomery, Alabama.

Active at the college and in the community, the chapter has been hosting “A Celebration of Black History” each Wednesday during February for Black History Month. The events take place from 11 a.m.-1 p.m. on Feb. 19 and Feb. 26 in the G. Thomas Delaino Student Center and feature food, beverages, trivia games, music, dancing, poetry and more.

On March 9, PSC AASA will host a “Fun Gathering” at 3 p.m. in the student center. The event includes food and games. The “Fun Gatherings” are planned for the second Monday of each month.

The PSC chapter of AASA is also planning spring trips to the Tuskegee University and Florida A&M University, as well as preparing for an AASA Regional Retreat in Chipola on March 7 and the Florida African American Student Association Spring Convention in Daytona Beach in April.

The chapter will present a lecture by Florida State University’s Paul Ortiz on “The African American and Latinx History of the United States” at 4 p.m. Feb. 29 in the Hagler Auditorium, Room 252. Also on March 27, the PSC AASA chapter will dish up a rib dinner fundraiser. For $10, chapter members will deliver a meal of barbecue ribs, macaroni and cheese, baked beans, potato salad, a beverage and dessert to any office on campus. (They will also deliver off campus for orders of five or more. To order, email tanderson-steele@pensacolastate.edu or text 850-525-1761.)

“We try to keep them active,” said PSC AASA co-advisor Lois Hurd. “We’ve been successful because we are involved in the community and involved in issues that are important (such as the Santa Rosa Community Remembrance Project Coalition).

Currently, the PSC AASA has about 44 members. The Florida AASA began as the Black Student Union in the 1970s before changing to the African American Student Association decades later.
Tiffany Isom, PSC AASA president, said the organization helps young African-Americans understand their roots a continent away.

“As a black woman, it’s taught me a lot about who I am,” said Isom, who previously earned an associate degree in General Studies at PSC but is now studying Business Entrepreneurship. “We talk a lot about African American history, but also African history. We didn’t start out as slaves, so it’s truly given me a background of who I really am.”

The PSC AASA chapter is open to any student – regardless of race – with a grade point average of at least 2.0.

“It’s given me a better and enhanced vision of myself,” Isom said. “And it gives all of us an opportunity to learn about ourselves and our rich history and all the people who paved the way for us.”

PHOTO: Tiffany Isom, Cam Hagans, Lepoleon Williams, Michelle Jones and Fauni Figureroa play traditional African instruments at the Black History Celebration on Feb. 19 in the Pensacola State College G. Thomas Delaino Student Center. There will be another Black History Celebration from 11 a.m. to 1 p.m. on Feb. 26 at the Student Center. The events are hosted by the PSC African American Student Organization.