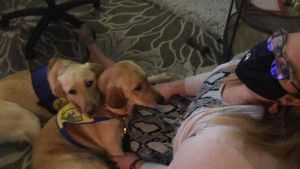 We’ve heard a few people say they have the best job at Pensacola State College.

Brittney Clark, PSC Coordinator of Mental Health Services, is one of them.

Sure, it’s a hard, emotional job offering guidance and empathy to some of the College’s most emotionally vulnerable students. But the payoff when she can make a difference in those students’ lives is huge.

And a bonus? Dogs are involved.

Clark has an adorable, sweet doggie to help her help students. Actually, she currently has two therapy dogs in her office on the Pensacola campus, but one of the dogs, Milly, is heading off for a new adventure in February. But Rudy, an affectionate and loving Labrador retriever, has recently arrived on campus and already settled into his job as a PSC facility service dog.

“Students get really happy when they see the dogs,” said Clark, as she rubbed Milly’s ears while Rudy rested on a guest’s shoes – my shoes. “I think they provide a safe space for them. Therapy can be a scary thing, especially if you have never engaged in therapy before. Sometimes, you’re telling your deepest, darkest secret and a dog can provide a gateway to that safe space.”

Both Rudy and Milly were provided to Clark, a trained facilitator, by Canine Companions for Independence, a California-based non-profit that has trained and placed more than 6,500 assistance and therapy dogs during its 45-year history. Milliy, a Golden retriever/Labrador mix, turns 2 in March. During Milly’s year-and-a-half at PSC, she has been training with Clark, but will go to Orlando for six months training to “hone her skills,” Clark said.

Rudy has already graduated from all the training courses and is expected to be a permanent fixture at PSC as long as Clark is in her position.

The dogs are owned by Canine Companions for Independence, but live with Clark.

“Rudy is kind, he’s inquisitive and a little laid back,” Clark said. “He’s very loving. Milly is my wild child.”

“She was the hardest to raise so far,” said Clark, who has raised five dogs for Canine Companions for Independence. “She’s the smartest and that gets her in trouble sometimes. But she’s probably the most loving puppy I had.” 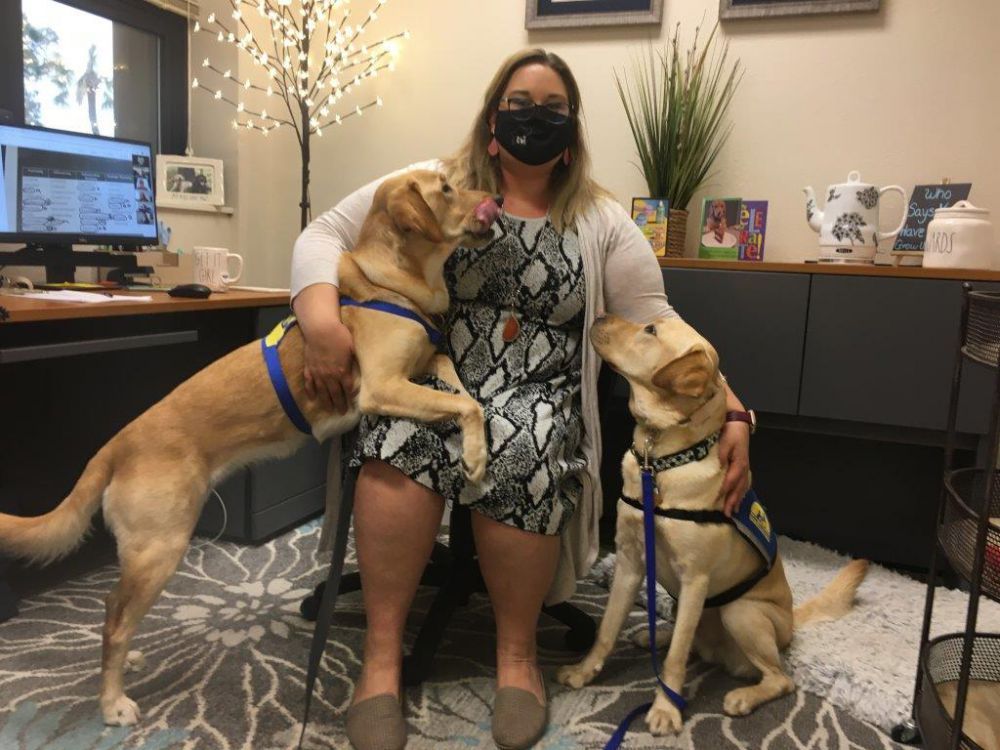 Clark said she was inspired to become involved with Canine Companions for Independence after her sister, who is in a wheelchair, was partnered with a service dog in 2010.

“I wanted to give back,” she said. “I realized that these dogs could help in therapy.”

Clark said she sees students for counseling who are experiencing various problems and traumas.

“Some might come for anxiety or depression,” she said. “We have students who have severe psychiatric disorders who come for coping skills and support.”

Clark tells every student before a visit that there will be a therapy dog in her office during the visit. If a student doesn’t like dogs, or is allergic, Clark will counsel the student without the dog.

But that hasn’t happened yet. All the students she has counseled have loved having the dogs nearby, she said.

“They’re always excited to see them,” Clark said. “They’re usually standing at the door waiting to greet a student.”

Rudy has learned special commands that will help him alleviate some student stress. He can “nudge” a person who is disassociating or distraught, or he can “cover” and lay on a student’s lap, which can provide deep-pressure stimulation, Clark said.

She said the “nudge” and “cover” commands can help students suffering from PTSD or anxiety.

“It really calms your nerves.”

Veronica Jennings, PSC Project Coordinator for Sexual Assault and Relationship Violence Prevention, works in a nearby office, and says the dogs are a welcome addition to the workplace.

“They bring a very calming effect to the office,” Jennings said. “It’s always a pleasant treat to see them. They help relax you and put a smile on your face. Our work can be very stressful, and this can help ease some of that stress.”

Clark has a water bowl in her office, and a few dog toys scattered around. She usually walks the dogs – about a mile – during lunch.

“I do have the best job here,” Clark said. “Sometimes the job can be very hard because of the emotional issues we deal with. Sometimes the dogs can be the ice breaker we need. It can really bring a bright point in your day to love and hug and be licked by a dog.”

Of course, she will miss Milly.

“She’s going to spend six months to a year honing her skills and learning what’s best for her,” Clark said. “Of course, if she flunks out of doggie college, she can come home and be a forever pet.”

“Me. If this girl flunks out, she’s coming home.”