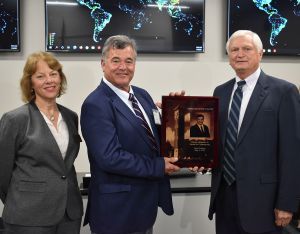 Pensacola State College fortified its position as a growing regional leader in cybersecurity on Tuesday, May 4, with the unveiling of the state-of-the-art Donald McMahon III Center for Cybersecurity, which is housed in the newly-opened Baars Technology Building.

The Center for Cybersecurity was named for McMahon, a Pensacola businessman and philanthropist, in appreciation and recognition of his $250,000 donation to PSC to support students enrolled in the cybersecurity program or closely-related fields of study.

“Isn’t it something?” McMahon said as he toured the facility with friends and family members – including his adorable grandchildren. “This is going to help generations of students who are going into one of the most needed and fastest growing fields in the country.”

The College’s Bachelor of Applied Science Degree in Cybersecurity will also now bear McMahon’s name. PSC offers both an Associate degree and a Bachelor degree in cybersecurity.

“We have Donnie to thank for the students who will be the recipients of these scholarships,” Pensacola State College President Ed Meadows said at the ceremony, which was attended by members of the PSC Board of Trustees and the PSC Foundation Board of Governors. “We have students who are coming to Pensacola State College to get an education and earn a better living for themselves and their families. This scholarship is going to be one of the ways in which they do that.”

At the May 4 ceremony, two bronze plagues with McMahon’s likeness and biography were unveiled, as was the signage for the Donald McMahon III Center for Cybersecurity. 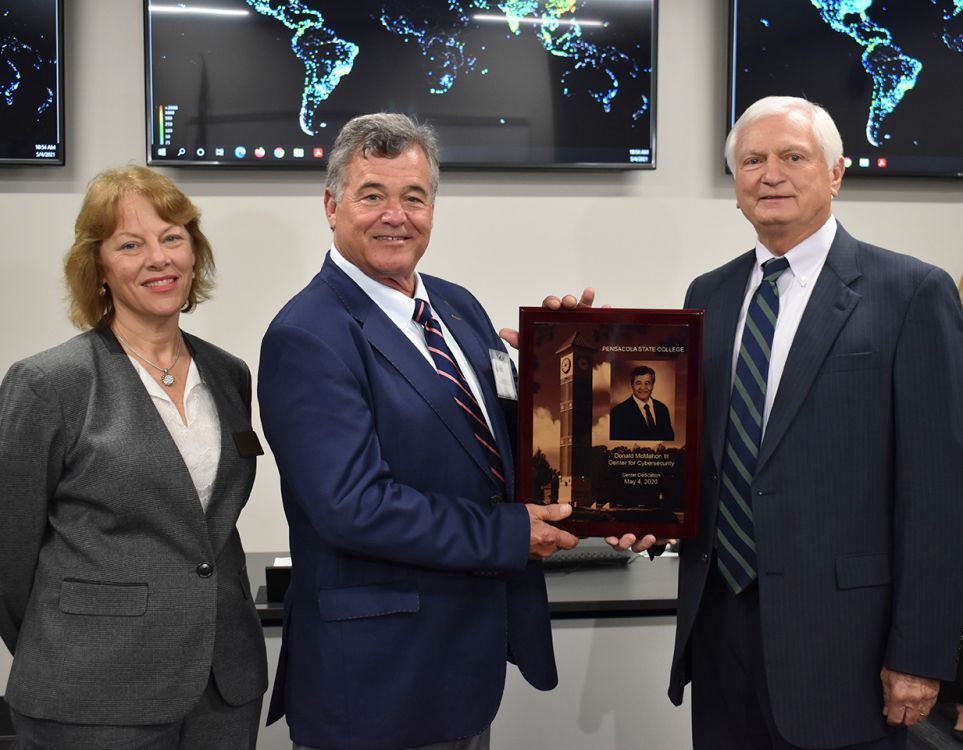 McMahon is a successful businessman in numerous fields. He entered in the insurance business in 1977 and established Donald McMahon & Associates in 1990, serving as president. He merged his company with Hadder Insurance in 1999, forming McMahon-Hadder Insurance. He founded the Pensacola Bay Oyster Company in 2013.

He is a long-time supporter of PSC and its mission. He served on the PSC Foundation Board of Governors from 1995 to 2008 and was named a Governor Emeritus.

The Donald McMahon III Center for Cybersecurity is a multi-classroom facility that includes a cyber warfare range, which allows students to access real-world networks and systems in a protected area called the Sandbox, which is not connected to any other College or outside systems.

“I have been impatiently waiting for this building to be made ready for the cybersecurity program,” said student Ted Sumrall, who will earn his Bachelor of Science Cybersecurity degree in summer 2022. “I’m very excited. I can’t wait for additional students to be attracted to this building and join the program and make lots of money with their new degree.”

Classes in the Donald McMahon III Center for Cybersecurity begin May 12 – the start of the summer term.

Cybersecurity instructor Robert Pratten said the new facility will give students the most cutting-edge tools in cybersecurity. The Sandbox allows students to safely practice cyber attack simulations and hacking exercises without putting other College systems at risk.

“We didn’t have a place to do capture the flag exercises,” Pratten said. “Now, we have a safe place for network defense, hacking, breaking in, breaking down barriers to get in. We can’t do those kinds of things anywhere else.”

“There is a need in this community to support job growth and development and this institution has done it for many years,” McMahon said of Pensacola State College. “When you see what they’re doing here at the College, and in the cybersecurity program, you’ll be amazed.”

For more information on the PSC Cybersecurity program, go to https://www.pensacolastate.edu/academic-programs/cysc-bas/ or call 850-484-2523.