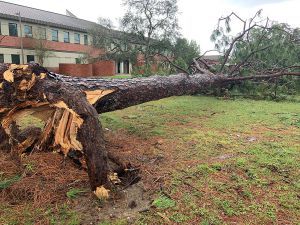 Of course, there would be a hurricane. It’s just that kind of year.

Pensacola State College resumes classes on Monday, Sept. 28, after shutting down for two weeks in the approach and aftermath of Hurricane Sally, which caused damage on most PSC campuses and centers and throughout Northwest Florida and Lower Alabama.

“It wasn’t good,” PSC President Ed Meadows said of the hurricane’s impact on the College. “I’ll be thankful to see 2020 go by.” But he said that PSC was committed to continuing to provide a quality education to its students.

Part of that flexibility includes additional Friday class periods for students to make up for the time lost during the two weeks Pensacola State was closed.

“We want to ensure that we are providing students with all the instruction they need and expect,” said Erin Spicer, PSC Vice-President of Academic Affairs. “That’s going to mean adjusting some calendars and making up some lost time.”

Instructors will provide guidance to their students as to any changes to schedules or venues.

“We have to be understanding,” Meadows said. “Not everyone is in the same place as far as recovery from the storm. They might have personal hardships that are going to require their attention. We will work with students to help them get through this without them having to sacrifice their education.”

Among the major damage caused by Hurricane Sally:

The Louis A. Ross Health and Sports Center – which includes the gymnasium – as well as the Anna Lamar Switzer Center for Visual Arts, the maintenance building and the Jean and Paul Amos Performance Studio (WSRE) received significant roof damage and will need to be replaced. No athletic practices or activities in the gymnasium are permitted and visual arts classes will be moved to other areas of the campus. The WSRE studio also has a temporary roof cover but is operating and on-air using generator power.

Some buildings damaged by water were dried using large industrial dryers and moisture-removing machines. Numerous trees were uprooted or had limbs and branches ripped away by Sally’s winds. Some fences were damaged, including fencing on the athletic fields.

The climate control was disabled by Hurricane Sally but expected to be operational by the time classes resume on Sept. 28. Buildings 3000 and 3200 have been temporarily closed because of water damage.

There was no damage at the Century or South Santa Rosa centers.

“There will have to be a relocation of some classes,” Meadows said, noting that most students are taking online classes this semester because of COVID-19. “But we’ve been working (the past week) to get all the campuses and centers back in the best shape we can.”

Most of the tree debris should be removed by the time students return to classes.

“The larger trees will take longer,” Meadows said. “But we will have a safe campus for students to return to.” (To ensure that safety, all COVID-19 protocols in place before Hurricane Sally will remain. So mask up and keep your distance.)

Meadows praised all those who worked to ensure a safe reopening.

“I cannot say enough about the dedication of our maintenance staff, BrightView Landscape Services and BELFOR Property Restoration overseen by our Director of Facilities, Diane Bracken, for their tireless work 24/7 to get our college campuses recovered and ready for students,” he added.

PSC on the road to recovery from Hurricane Sally

Scenes of the recovery efforts in and around Pensacola State College's Pensacola campus. Video by Troy Moon