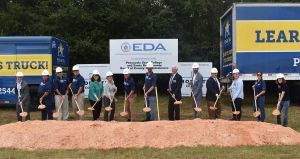 “This is such a great occasion for us,’’ Meadows said at the groundbreaking press conference. “There is a tremendous need for truck drivers, nationally and locally.”

The facility is being funded by a $3.8 million Triumph Gulf Coast grant, a $1.6 million U.S. Department of Commerce grant, as well as state and local funding.

Attending the press conference and groundbreaking were partners in the project, including officials from the Santa Rosa County Board of County Commissioners, Triumph Gulf Coast Inc., the Santa Rosa Economic Development office, the U.S. Department of Commerce’s Economic Development Administration, members of the local legislative delegation and other public service officials and PSC instructors, coaches and administrators. 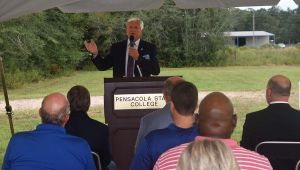 “This is a game changer for our area,’’ said David Bear, a Triumph Gulf Coast Inc. board member and vice president of the Lewis Bear Co., a family-run beverage distributing business that depends heavily on commercial truck drivers. “There is a huge need because there is a national shortage of truck drivers. That shortage is hurting us here as well. Ten months can’t come soon enough.”

Through an agreement with NAS Pensacola, the College’s truck driving program currently operates at Bronson Field near Blue Angel Recreation Park ─ just west of the Warrington campus. In 2019, the College purchased a 53-foot, cab-and-trailer training vehicle with the $125,000 Governor’s Job Growth Grant from the Florida Department of Economic Opportunity.

A second trailer-truck was donated by the Lewis Bear Co. Both vehicles are used to train students in a variety of needed skills, from driving and safety techniques to cargo handling and document procedures for over-the-road preparation for a CDL license.

The Truck Driver Training Facility will include truck bays, three classrooms, a half-mile asphalt driving loop and a concrete driving pad. The program currently uses two state-of-the art Virage Truck simulators that will be used at the new facility.

So far, more than 40 students have completed the College’s truck driving training program and earned CDLs, said Michael Listau, director of Workforce Education at Pensacola State. He said that when the facility is completed, PSC will be able to double its cohort sizes and get more truck drivers on the road in a short amount of time.

“These students can walk into high-paying jobs,’’ Listau said. “Many students have jobs already lined up.”

He’s been driving commercially for Melton Trucklines out of Tulsa, Oklahoma, after finishing the PSC course. He was an offshore engineer previously but was let go when the COVID-19 pandemic hit.

“This school and this program changed my life,’’ Henderson said. “My career is shooting to the moon. I’m loving life. And this new facility is just going to make the program that much better and stronger.”

Waltman recently returned to Pensacola from Oregon where she had been working as a contract driver on a water truck tasked with helping assist firefighting efforts in Oregon.

“My life would be completely different without this program,’’ said Waltman, who also assisted lead instructor Robert Paterson in training students for a short period after graduation. “The instructors are great and so is the training.”

Students in the program will drive at least 1,000 miles in training. When students complete the 320-hour Commercial Vehicle Driving course they will have the tools needed to earn a Florida Class A Commercial Driver License.

According to a recent estimate released by the American Trucking Associations, the country now needs an additional 60,800 truck drivers. That figure is expected to grow to more than 60,000 by 2028.

“If you would have mentioned to anyone 10 years ago that a state college would be involved in a truck training program, they would have said you are crazy,’’ said Broxson, a recent inductee into the PSC Athletics Hall of Fame.

“This is a direct route from education to getting a job and isn’t that the point of education? It’s about getting people to work and realizing the American dream of supporting a family and being involved in a community.” 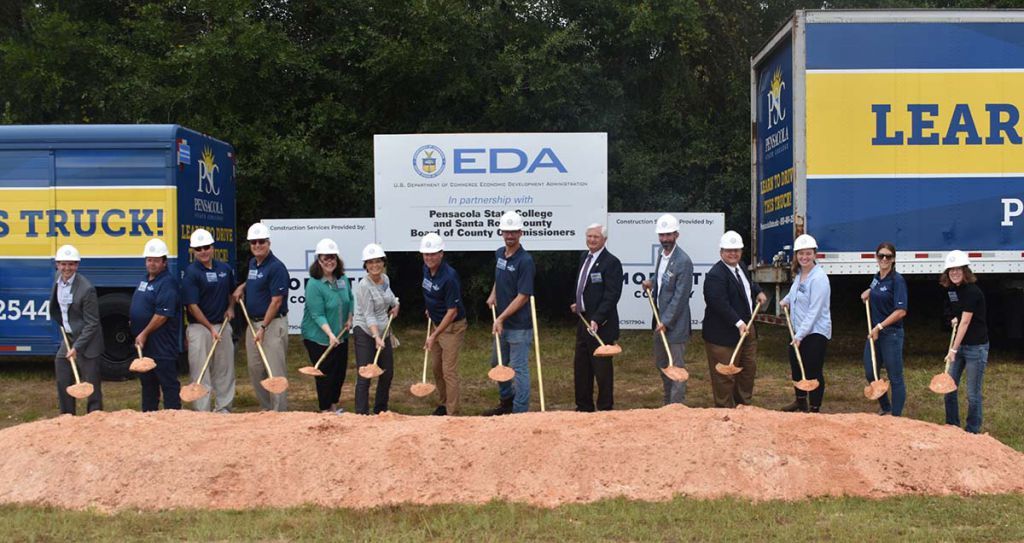