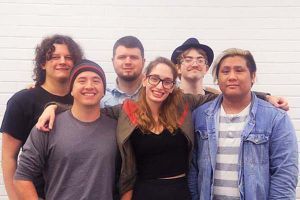 Held Feb. 24-25 in Minneapolis, the tournaments included the top 23 two-year college brain teams in the nation.

The Pensacola State team – made up of Tiffany Byrd, Saul Horacek, Michael Blackwell, Mathew Roush, Josh Enrile and Ryan Medina – went into the competition ranked No. 20.

“We were excited to receive a bye to the tournament and are very pleased with our performance,” said Byrd, who is the team captain. “To be one of the ‘Elite Eight,’ is great. We know that there is always room for improvement so we’re continuing to work hard.”

The “Elite Eight” finish is a milestone for Pensacola State’s Brain Bowl teams. In recent years, the college team has earned bids to three other national championship tournaments – 2010 in Marianna; 2013 in St. Louis; and 2014 in Atlanta.

Ken McAferty, professor of English in the English and Communications Department and the team’s coach and advisor, said this year’s team is continuing the legacy.

“These students donate a lot of their time into Brain Bowl and have worked so hard this year,” he said. “These are among Pensacola State’s best and brightest students.”

Dr. Ed Pate, assistant department chair for the English and Communications Department, added the team has made the college extremely proud.

“It’s gratifying when Pensacola State is recognized nationally, but it’s especially gratifying – and inspiring – when the national spotlight shines on our students’ efforts and accomplishments,” Pate  said.

Overall, Florida College System institutions fared well in the national tournament – teams from Valencia, Chipola and State College-Manatee placed No. 1, No. 2 and No. 3, respectively. A second Valencia team placed 10th at the tourney.

A second Chipola team along with groups from Broward, Gulf Coast, Tallahassee and Central Florida state colleges also placed in the Top 17 finalists at the tournament.