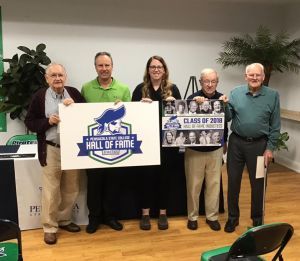 The inaugural class of inductees to the Pensacola State College Athletics Hall of Fame was introduced at a press conference held Dec. 17.

“We think this is a historical moment for our College,” said Pensacola State President Ed Meadows. “Thanks to Bill Hamilton and Hailey Lotz … the two of them, along with the booster club committee, they put together an outstanding process for the selection of our Hall of Famers.”

Hamilton, Pensacola State’s athletic director, also unveiled the Hall of Fame logo, designed by PSC visual arts student and College Marketing Intern Darrian Montgomery. He said that a revamp of the lobby at Hartsell Arena is in the works, providing a backdrop to house portraits of Hall of Fame inductees. The Don Peery Room will gain a large wall mural. Inductees also will be able to personalize the design of their individual Hall of Fame ring.

“This has been a long process for Hailey (Lotz) and me. Nothing here has not been touched by the two of us,” said Hamilton as he thanked athletic administrative assistant Marcie Roebuck and Coaches Lyndsey Angus and Jennifer Belarmino for their part in running the behind-the-scenes operation while he and Lotz focused on the renovation and design concepts. “It’s been a team effort.”

WEAR sportscaster Dan Shugart will be the master of the ceremonies for the ribbon cutting and induction ceremony, set for Feb. 16 during intermission of the women’s and men’s basketball games against Gulf Coast State College. The Lady Pirates game will begin at 5:30 p.m.

Litton, who holds the Major League Baseball record for playing all nine positions, spoke on behalf of the inductees.

Inductees were chosen from a long list of nominees selected by a private committee comprised of athletic staff and coaches, other faculty members, former players and former coaches.

Pensacola State College Athletics is now taking nominations for the 2019 Hall of Fame class. Visit http://athletics.pensacolastate.edu/navbar-hof for more information on criteria and procedure and nomination forms.

“Pensacola State has a long and storied sports and athletic tradition. This Hall of Fame will stand as a reminder for all time that these awesome individuals got their start here,” Hamilton added.

Gilmore holds six softball records at Pensacola State and is the College’s all-time leader for volleyball aces. She was named to the 2003 Louisville Slugger/National Fastpitch Coaches Association NJCAA Division I All-America Team and went on to play softball at the University of Central Florida for one season. She transferred to the University of Mobile where she was a member of the 2006 Mobile NAIA National Champion team. She’s now an assistant softball coach at Tate High School where she coached the 2015 State Champion girls’ softball team.

Long-time supporters of Pensacola State Athletics round out the inaugural class: 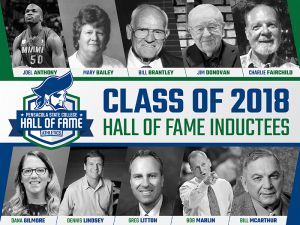