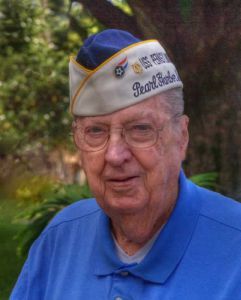 In honor of those lost in the service of our country, selections include music from the World War II epic series, “Band of Brothers,” and “American Pageant,” composed by Thomas Knox of the U.S. Marine Band and played at every Presidential Inauguration since the early 1970’s.

Pearl Harbor Survivor Frank Emond highlights the concert as he recounts his experience on that fateful Dec. 7 morning, during the performance of Jay Bocook’s “At Dawn They Slept.” The 98-year-old retired musician then conducts Sousa’s “Stars and Stripes Forever.”

Pensacola Civic Band invites any veterans’ organizations to attend and be recognized at the concert as well as families of veterans lost in service of our country. These organizations should contact PCB Publicity Chairman Lewis Garvin at 850-291-8331 or lgarvin81@gmail.com.

Food vendors will be at the Amphitheater. Concert goers should bring blankets or lawn chairs to enjoy the concert.

Additional sponsors are needed to help defray production costs for the concert. The Pensacola Civic Band is a 501c (3) organization and interested sponsors should also contact Garvin.

For details about the concert and Pensacola Civic Band, visit www.pensacolacivicband.org.