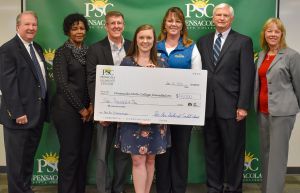 On Jan. 13, Ramsey and other Pen Air officials put those words into action (again), giving $5,000 to the Pensacola State College Scholarship Fund in a ceremony held in the Pen Air Federal Credit Union Classroom located in Chadbourne Library.

The scholarship donation is a continuation of the credit union’s support of the college. In November 2016, Pen Air gifted the College with a $100,000 contribution to establish the Pen Air Federal Credit Union Endowed Scholarship.

Castle just started her second semester at PSC, where she is studying medical sonography.

“It was a very big shock for me. It will definitely go toward books. I’ve been told I’ll be spending a lot of money on books,” said Castle who became interested in sonography while as a student at Robertsdale High School in Baldwin County, Alabama.

The 2016 Pen Air contribution was given to celebrate the college graduating more than 100,000 students since its inception in 1948. The gift also helped establish the Pen Air Federal Credit Union Classroom – a digitally-enhanced classroom where financial literary classes, workshops and seminars are held.

The credit union annually awards $5,000 to the PSC Scholarship.

“We appreciate the opportunity to come here each year and meet with some of these students,” Ramsey said. “I think this is a great partnership between Pen Air and PSC. Our mission is to enhance people’s lives, just as PSC does. We do it financially, but we try to do it educationally as well.”

Pen Air hosts financial literacy classes and workshops across Northwest Florida, including at area high schools as well as local colleges and universities such as PSC and the University of West Florida.

“It’s certainly a wonderful partnership,” Meadows said. “And it’s a wonderful way to support your community. We have a lot to be thankful for in the beginning of 2020,” including the ongoing relationship with Pen Air.

Ramsey said the gift helps Northwest Florida as a whole.

“An educated community is beneficial to everyone,” he said, “and not just for the individual receiving the scholarship, but the community at large.”