Patterson Hood of the Drive-By Truckers to perform at PSC on Nov. 30 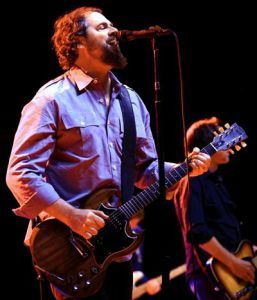 The Drive-By Truckers’ Patterson Hood will perform a solo concert at 7:30 p.m. Friday, Nov. 30, at Pensacola State College.
The concert will be held in Ashmore Auditorium, Building 8, on the Pensacola campus at 1000 College Blvd.

Hood, who co-founded the Drive-By Truckers with Mike Cooley, is a gifted guitarist, songwriter and vocalist. Originally from Muscle Shoals, Alabama, his music often pays homage to his Southern heritage as well as addressing sociopolitical issues.
Over the past two decades, Patterson has achieved success as a solo artist and member of the Drive-By Truckers. He has released three solo albums ─ “Killers and Stars” in 2004, “Murdering Oscar (And Other Love Songs)” in 2009 and “Heat Lightning Rumbles In The Distance” in 2012.
In 2012, he also formed Patterson Hood and the Downtown 13 with Mike Mills of R.E.M.; John Bell and Todd Nance of Widespread Panic; Drive-By Truckers members ─ Jay Gonzalez, Brad Morgan, John Neff and David Barbe; and Athens, Georgia, musicians ─ Claire Campbell, Lera Lynn, Henry Barbe, Brannen Miles, Carter King and Payton Bradford.
The group was formed to record the track, “After It’s Gone,” to protest the building of a Walmart in downtown Athens. Hood now lives in Athens, and the city is the origin of R.E.M. and Widespread Panic.
Tickets are $11, reserved admission; $9, seniors, non-PSC students and children; $7, PSC Alumni Association, PSC Seniors Club, PSC faculty and staff; and free for PSC students.
Purchase tickets online at www.pensacolastate.edu/lyceum or at the Lyceum Box Office, Building 8, Room 861, from 8:30 a.m. to 4 p.m. Monday-Friday. Tickets also are available at the door one hour before a performance.
For reservations or more information, call the Lyceum Box Office at 850-484-1847.