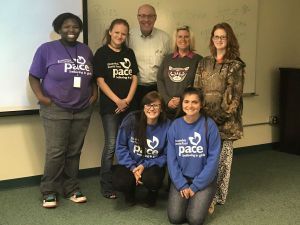 However, the 18-year-old wants to attend college, become a counselor and eventually purchase a “nice home.” Thanks to two Pensacola State College professors, Tia along with five other PACE Center for Girls students understand the basics of financial literacy.

Pensacola State professors Susan C. Robbins and Lawrence D. Schuffman recently presented “Your Flight to Financial Literacy – Steps to Success” to the students during a workshop held on the Pensacola campus.

“These are teenagers – 15 to 18-year-olds – with little or no prior money management skills at all,” Schuffman explained. “It is extremely important that they learn financial literacy now – so they won’t make mistakes that will impact them later. If you don’t make an impact on young people now, it can be impossible for them to get out debt when they’re older.”

The professors also developed games and other interactive exercises using the analogy of the students being airplane pilots and setting a flight plan for their financial futures. The workshop even included the “Saturday Night Live” skit, “Don’t Buy Stuff You Cannot Afford.”

In the 2006 infomercial parody, Steve Martin and Amy Poehler portray a married couple confused about their finances. A spokesman played by Chris Parnell tries to sell them the financial guide, “Don’t Buy Stuff You Cannot Afford.”

“We want them to be the pilot of their own ‘Financial Flight Plan,’ ” said Schuffman. “Once they completed workshop, we issued them their own provisional pilot’s licenses.”

Robbins added the workshop’s overall goal was to ensure the students learned the basics of financial independence.

“Your credit rating is very important to protect,” she told the students during her presentation. “In a way, it speaks of your character and will impact you in the long run.”

The lessons taught during the workshop stuck with Tia.

“I’ve learned that no matter how badly you want something, it is not wise to use credit – unless you have the cash to pay for the item,” she said. “I really wasn’t totally aware of the ins-and-outs of personal finance until today. I really learned a lot, some things I thought I knew were totally wrong.”

The importance of saving money was Brianna’s main takeaway from the workshop.

“Pay yourself first and spend the rest of your money wisely,” said the 16-year-old. “You don’t want to work all of the time just to pay someone else. If you want something, save up for it – unless it’s a big ticket item like a house or car.”

“These life skills are not part of the curriculum – but need to be,” Rose said. “My students had a ton of questions during the workshop, the professors did a great job presenting the material and made it very interesting – not only to the students but to me.”