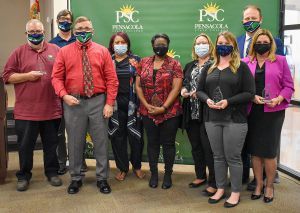 To get through a tough, challenging and unprecedented year, Pensacola State College leaned on its best.

And on Thursday, Oct. 29, nine PSC employees were honored as the College’s “Employees of the Year” for their hard work and dedication to the school.

“Here we are today with a room full of loyal, respected, hardworking employees that deserve recognition from this College for the fine work they’ve done day-in and day-out,” said PSC President Ed Meadows in remarks to the award recipients and guests in the Pensacola campus Delaino Student Center.

“The folks we’re going to recognize today have always performed above the call of duty to distinguish themselves,” noting they were high performers “during the COVID-19 pandemic and before the pandemic.”

The 2019 Professional Employees of the Year are:

● Ella Barker, general accounting coordinator in the Comptroller’s Office, has worked at the College for more than 33 years.

She earned her associate degree in business from PSC and bachelor’s and master’s degrees from the University of West Florida.

“I’m very happy that all my hard work is being acknowledged because it is not easy being a supervisor,” she said. “I like the people I work with. We help and support each and that is one of the best things about working at the College.”

The Pensacola native and Tate High School graduate said it has been a pleasure working at PSC.

“I’ve grown a lot while employed at Pensacola State and I’ve learned a lot. I am very happy to be here,” she added.

● Butch Branch, coordinator of the fitness center and Student Leadership and Activities on the Milton campus, is a U.S. Navy veteran. He also is a PSC alumnus and earned his bachelor’s and master’s degrees from UWF.

Branch taught at the College as an adjunct professor in the late 1980s and has been coordinator of the Milton L.I.F.E. Fitness Center and Student Activities since 1998. His wife, Jeanne Branch, is a faculty member in the Business Department and his daughter, Michelle Branch, is a PSC financial aid coordinator.

“It’s the people at PSC who make it special,” Branch said. “It’s the mentors I’ve had, the people I work with and my family that brings out the best of me.”

● Paul Chaney, instructional technologist in eLearning Department, has worked at the College for nearly 20 years. Chaney is a PSC alumnus who also has a bachelor’s degree from Atlanta College of Art.

“I really love the people I work with,” Chaney said. “I’m with a good group of people.” Working in the eLearning Department, Chaney and his fellow employees were charged with transitioning most classes to online when the pandemic hit in spring.

“We were kind of on the spot,” Chaney recalled. “We had a lot of faculty and staff who didn’t have a lot of experience with eLearning, so we helped them all get on board.”

● Michael Johnston, executive director of Institutional Research, had been with Pensacola State since 2016. He has a bachelor’s degree from the University of Miami and a master’s degree from UWF.

Johnston credited his team for any success he has achieved at the College.

“It’s such a humbling experience,” Johnston said. “I feel so honored to share it with the others who received this award. I don’t feel this could ever be done by myself, but as a team. I’m so privileged to work with people of such diversity and who have so many strengths that allow me to succeed.”

● Patrice Whitten, executive director of Alumni Affairs, retired this fall after starting at the College in 1992. She is a PSC alumna and has a bachelor’s degree from UWF.

“It’s been a wonderful 28 years,” Whitten said. “I could not have imagined spending my time and career anywhere else.”

The 2020 Career Service Employees of the Year are:

● Shannon Crawford, senior administrative assistant in the Grants and Federal Programs office, has been a full-time PSC employee for just over three years.

A PSC alumna, she earned her associate degree in 2012 and is pursuing a Bachelor of Applied Science in Project Management. She plans to graduate in 2022.

Working at the College is a family affair for Crawford. Her mother, Traci Jones, also has worked at Pensacola State for about 20 years.

“I am grateful to work with such wonderful people because without them I could not do my job as well as I do,” said Crawford, a Pensacola native and 2008 Pine Forest High School graduate.

“I love being a part of the College because it makes a huge difference in the lives of so many people. I love giving back to the community and working at PSC allows me to do that whenever I get a chance to help one of our students.”

● Ricky Enfinger, maintenance supervisor in Facilities, Planning and Construction, has worked at PSC for eight years.

“I like the job and I really like the people,” said Enfinger. “Hurricane Sally really messed us up and a lot of buildings were damaged, so there was a lot of work to do. So we’ve been busy.”

● Teresa Jackson, administrative assistant in the Mathematics and Computer Science Department. Jackson has been a PSC employee since 2003. She is an alumna of PSC, with a Bachelor of Science and a master’s degree from Troy University.

● Mel Miner, contract administrator for legal services in Business Affairs, has been at the College just over five years. She started her PSC career as a Keegan Staffing employee.

“The people are awesome, and I also love that we help students. We are here for the community,” said Miner who was “super surprised” to be recognized. “I did not expect it at all.”

The Iowa native earned associate and bachelor’s degrees in leadership and business from William Penn University. She moved to Pensacola because she had family here and for the weather.