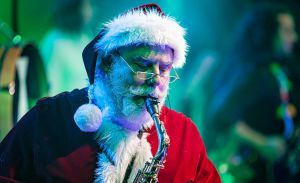 The global pandemic knocked the wind (and the percussion, brass, strings, etc.) out of Pensacola State College’s band program, just as it did similar programs across the country.

Bands couldn’t get together to play. Performances were cancelled. Everything went quiet.

Enter Doug Holsworth, recently hired as the new PSC Director of Bands, replacing the legendary Don Snowden, who retired in summer 2020 after 33 years at the College. Holsworth will be the instructor and conductor for the PSC Concert Band, Jazz Band and Pensacola Civic Band.

A Pensacola native, Holsworth returned home in 1995 where he was named Director of Bands and Performing Arts chair at his high school alma mater (Class of 1980) Escambia High. During his 27 years at Escambia, Holsworth served as a Band Team Leader for the Escambia County School District and as the Florida Bandmasters Association District 1 chair.

Holsworth also is a theater performer who has worked with the Pensacola Little Theatre, where he once portrayed Kris Kringle/Santa in a production of “Miracle on 34th Street.” He also played saxophone as Santa Claus during a guest performance with local favorites ─ the White Tie Rock Ensemble ─ for a holiday concert.

“The pandemic knocked the snot out of all the ensembles – middle school, high school and college,” he said. “I want to rebuild what PSC had when Don (Snowden) was here. One of the reasons I was picked for this job is because of the connections I have made. I can walk into any high school band room because I’m on good terms with all those band directors. I can talk to those students and tell them, ‘If you’re thinking about college, come see us.’ Those relationships are something we’re banking on coming out of the pandemic.”

“I have observed his success as a musician and band director for many years,” Phillips said. “Doug’s years of outstanding service as band director at Escambia High School and as a drill writer, clinician and adjudication for area band programs will open doors for recruiting new band students for PSC. Doug’s longtime involvement with Pensacola Little Theatre will enhance our exposure to the Pensacola theater community. Doug’s energy and talent will be a great asset to the Performing Arts Department’s efforts.”

Holsworth began playing saxophone in sixth grade at Bellview Middle School where he was in the Beginning Band.

“I knew from the get-go I wanted to be a band director,” he said. “That’s what I’ve always wanted to do.” One of his highlights while band director at Escambia High was conducting the school’s band at a performance at Carnegie Hall in New York City in 2018.

Holsworth attended the University of Alabama on an ROTC scholarship. After graduation, he served in the U.S. Army as a Signals Intelligence pilot. He was in the Army from 1985 to 1992, leaving as a captain.
Besides music and theater, Holsworth is also a visual artist and teaches painting at Painting With a Twist in Pensacola. Holsworth and his wife Kathy have two children and two grandchildren.

“I’m really excited about being here at PSC and resurrecting these bands,” he said. “There’s just something about getting together with 60 of your friends and making incredible music.”