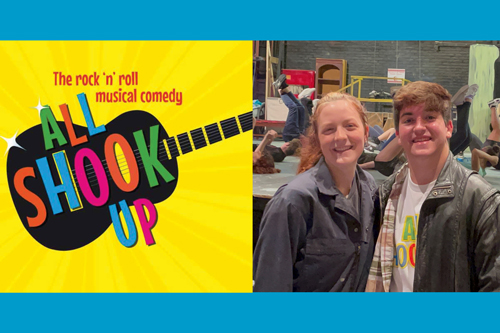 The cultural flame lit by Elvis Presley has never been extinguished, even 45 years after his death. Still, that flame hasn’t burned this bright for years.

A new generation has discovered the music of the heralded “King of Rock ‘n’ Roll” largely due to the new acclaimed Baz Luhrmann film, “Elvis.” Some talented members of this young generation will perform some of Presley’s best-known music in the jukebox musical, “All Shook Up,’’ which is the 2022 PSC Summer High School Onstage Workshop Production, July 22-24 and July 29-31 in the Ashmore Auditorium on the Pensacola campus.

This is PSC’s 31st Summer High School Onstage Workshop. The annual workshop gives high school drama students to participate in a college-level theater production. This year, 45 students from Escambia and Santa Rosa county high schools will perform in the production, which features a story by Joe DiPietro inspired by the music of Elvis and another old hitmaker, William Shakespeare.

PSC Theater Director Rodney Whatley, who is directing the production, said he was aware that a new “Elvis” movie was in the works when he picked “All Shook Up” for the Summer High School Onstage Workshop production, but didn’t know it would be released in late June, just weeks before the PSC production.

“I got so lucky,’’ Whatley said. “The timing was almost perfect.”

Not only have Whatley and his assistant director, Milton High theater instructor Jennifer Bunnell, seen the “Elvis” film – they loved it – but so has most of the young cast.

“Most of them went together,’’ Bunnell said. “They might have known a little about Elvis but they’re definitely learning a lot more this summer.”

The leads in the production are Bruno DeSilva of Gulf Breeze High School as “Chad,’’ the just-out-of-prison bad boy “roustabout” – the same name as Presley’s 1964 film – and recent Pace High graduate Anna Catherine Morgan as “Natalie,’’ a starry-eyed small-town mechanic.

“The music is high-level stuff and is still really good today,’’ said Morgan, who will soon study theater at Oklahoma City University. “I knew his music already because my brother was obsessed with him.”

DeSilva, who will start his junior year at Gulf Breeze High in August, said his cousin was an Elvis fan but he didn’t really learn to much about the Tupelo, Mississippi, legend until he saw the movie and started researching the project.

“I love all the music,’’ he said. “I really enjoy singing to the music now since the lyrics have been drilled into my brain.”

Both young performers said they have enjoyed being part of the production.

“I’ve been doing this since (end of) eighth grade,” Morgan said. “Everyone is so sweet and talented. They really support you and want you to succeed.”