Mom was the President of the PSC Robinson Honors Program; now it’s her son’s turn 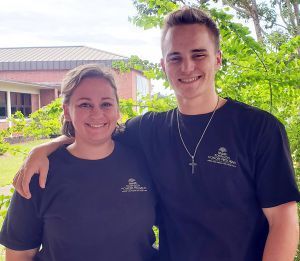 Jacob Kayl and his mother Audra Kayl-Woodruff have a good-natured academic rivalry going on.

During Audra’s first semester at Pensacola State College in 2018, she earned four “A” grades and just one “B.” Jacob would start classes at the College two years later.

“He was very quick to tell me he had a 4.0 (grade point average) when he finished his first semester,’’ she said. “I said ‘That’s great. I wouldn’t expect anything less.’”

“My mom always told me growing up, I could be as good as her and more,’’ Jacob said. “But looking at what she has done and is doing is intimidating.”

Audra graduated from PSC in December 2019 with an associate degree in pre-nursing. This December, she will earn her Bachelor of Science in Nursing from the University of South Alabama in Mobile.

Jacob graduated from Pensacola Christian Academy in spring 2020 and began classes at PSC in fall 2020. He hopes to follow his mother once again when he transfers to USA after graduating from PSC.

His mother is his inspiration. In fact, Jacob said, “my mom is my goal.”

He has plenty of reasons to be inspired by his mother.

“I started a family at an early age, but I had planned to go to college,’’ Audra said. “But as a mother I wanted to prioritize the kids first.”

She and her husband have seven children together, ranging in ages from 7 to 24. Jacob is 19.

Once the youngest of the children began school, college became a reality for Audra.

“It opened the door for me to have a little more time,’’ she said. “And I filled that time with school.”

Audra said she didn’t do that well her first semester – the same semester she received all those “A’s” and one not-too-shabby “B.”

“My first semester was the worst – it was very stressful and a bit overwhelming,’’ Audra said. “I was sitting around students who were my children’s ages and it just came easy to them. My brain wasn’t working as fast.”

She said it was the encouragement and advice of PSC instructors that pushed her to relax, focus and just work back into the school groove.

“I had to get used to it and my professor was very encouraging,’’ Audra recalled. “But I had to establish habits and get into a routine.”

She did ─ with the help of her children as well as her instructors.

“The kids, I’d ask them about some concepts,’’ Audra said. “I would ask them to help explain things. It was humbling. I had always been the homeschool teacher and there were a lot of roles that changed. We all grew a lot.”

Mom and kids even set up an office where they study together.

“I would do my homework and they would do theirs,’’ she said. “We all did our work together.”

The children are amazed by their mother’s achievements and commitment.

“My Mom is over there cranking out a 4.0 and doing honors courses and stuff,’’ Jacob said. “That’s crazy. So, when I knew I might have an opportunity to take honors courses and join the Robinson Honors Program, that’s what I decided to go after.”

Jacob, as proud as he is of his mother, is shooting higher. Way up there.

He aims to earn Bachelor of Science in aerospace engineering from USA then join the U.S. Space Force as an officer.

“I’d like to make a career out of it,’’ he said. “My end goal after retiring from the Space Force is to work for NASA. I’ve always wanted to be an astronaut… We’ll see how it all works out.”

Audra credits PSC with helping her and Jacob pursue and achieve their academic roles.

In fact, Jacob had originally been considering attending USA instead of PSC after high school.

“We had discussed it, but I thought PSC just offers such a great environment to start with,’’ Audra said. “You have smaller class sizes and you can have one-on-one help if you need it. It’s not as intimidating as starting at a four-year university where they won’t know your name. If you go to a state college, they know who you are, they know about your family and it’s just more comfortable. USA is a great place and I love it, but PSC is just a good transition for him.”

“We are honored to have had both Audra and Jacob represent us, not only as Robinson Scholars, but as the presidents of the Robinson Honors Club,’’ Carey said. “Audra and Jacob have that unique ability to lead and recognize greatness in others that they have yet to see in themselves. For our events and service activities, they are the first to volunteer, the first to arrive, and the last to leave- inspiring others by their actions. I am so proud of them and I can´t wait to see what they achieve in the future.”