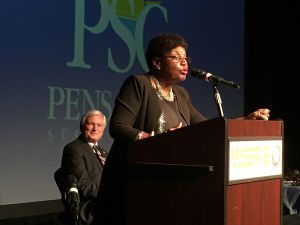 Tonie Anderson-Steele might make their brains explode. Hopefully not from boredom.

But she’s purchased some jacks and marbles – ask an elder if you don’t know what those are – and is going to teach a bunch of young millennials the bygone games of yesteryear. The Pensacola State Milton campus counselor is adviser to the College’s African American Student Association, and Anderson-Steele plans on breaking out the old-school fun at an upcoming “rest and relaxation” session.

“They’re in for a rude awakening,” Anderson-Steele said. “Some of them said they have never even heard of marbles or jacks.”

She laughed a bit.

“I’m going to be the top player,” she said. “But I’m going to show them how we used to have fun back in my day.”

Anderson-Steele is in her early 60s now, and she hasn’t forgotten the simple pleasures of her own youth. But she doesn’t forget the darker periods either. Or the darkness those who came before her were subjected to on United States soil.

She’s one of the facilitators of the Santa Rosa Community Remembrance Project Coalition, a project recently launched to investigate and recognize the nine people lynched in Santa Rosa County from 1884 to 1937.

The coalition is comprised of area community, civic and faith-based groups, including the PSC African American Student Association.

Anderson-Steele had always heard stories about lynchings, but the horror of the crimes committed against predominately African American men crystalized after a visit to The Legacy Museum: From Enslave to Mass Incarceration in Montgomery, Alabama, a project of the Equal Justice Initiative.

“It’s heart-wrenching what occurred,” Anderson-Steele said. “And it’s unacceptable that my ancestors were tortured and killed like that. We can’t bring them back. But we can research what happened and pay tribute to the victims. There needs to be a reminder of what happens when people hang on to racism.”

The Santa Rosa Community Remembrance Coalition meets in the Student Center of the PSC Milton campus. The next meeting is from 6-8 p.m. on Thursday, March 26. The group held its first meeting in January.

“Then I found out about the lynchings in my own county,” said Anderson-Steele, who lives in Pensacola, but drives to Milton for work. “It’s just unbelievable that that could happen in the county (Escambia) I live in and grew up in.”

According to the Equal Justice Initiative, six men were lynched in Escambia County from 1877 to 1950.

“It’s always been in the back of my mind,” she said. “And then I had the opportunity to be part of this coalition and it was just meant to be.”

It is that desire to strengthen the links to the past that inspires her to instill respect for that past to members of AASA.

The group meets each week, and each meeting begins with members paying tribute to those who inspired them. Names ring out at the meeting in rapid order – names of parents and grandparents who are gone and the names of men and women who inspired generations, from Malcolm X and Martin Luther King Jr. to Muhammad Ali and Madam C.J. Walker.

“A lot of young people don’t know about their history,” said Michelle Jones, AASA vice president. “They don’t know what it means and what it stands for. She’s like a pillar of history. She’s making sure that the generation after hers will learn their history and pass it on.”

Anderson-Steele has been involved with numerous civic and civil rights groups, ranging from Movement For Change to her own Change Tomorrow Today 365 nonprofit organization, which promotes education, charitable giving, community involvement and social awareness.

But on the Milton campus, she’s best known as a champion for students. And a campus fixture.

She’s been a counselor on the Milton campus since 1991.

“There is where I started and this is what I know,” Anderson-Steele said. “In a nutshell, I’m an advocate for the students.”

That means tackling a variety of problems and obstacles that students face.

“Sometimes students might not have funds for tuition,” she said. “I look for resources at the school to help them and get them in class.”

But most often, she’s helping young students chart their futures.

“They come in here not knowing their destiny and what their purpose is,” Anderson-Steele said. “Sometimes they’re just spinning their wheels taking classes. They have all these ideas, but I help them focus and narrow it down and get on a path so they can find success. It’s all about the students. I’m here to help with financial aid, teacher problems, GPA problems. I’m talking to them all the time.”

Besides, she knows their struggles.

She’s a graduate of Pensacola State College too. Though it was called Pensacola Junior College when Anderson-Steele was a student here.

“I was spinning my wheels too, taking courses and not knowing what I wanted to do,” said Anderson-Steele. “I just knew I never wanted to dissect another frog and I don’t like math.”

“My parents were not college graduates,” she said. “But education was very important to them.”

She’s the middle child of three. Her siblings both have university degrees.

“I know the importance of college education,” Anderson-Steele said. “That’s why this is a rewarding job for me in a sense. These students I help are going to be part of my legacy. If I can help them find success, or if I assisted them along the way, that’s an important accomplishment. If I helped them through their anxiety and frustrations and help them find their purpose, then that’s my success as well.”