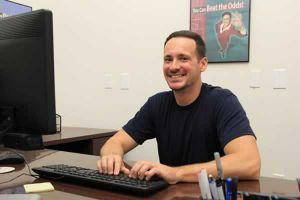 For the second straight year, Military Times names Pensacola State College in its list of Best for Vets: Colleges 2017. This recognition is based on a comprehensive survey of veteran and military student offerings and rates of academic achievement.

Talk to some student-veterans at Pensacola State and you will find they are not surprised at this national recognition.

When Charles Niedbala retired after a 20-year career in the U.S. Marines, he wanted to continue his passion for working with computers. Using the Post-9/11 GI Bill, he entered PSC as a full-time student majoring in cyber forensics in January 2016.

He says that transitioning from staff sergeant to student has been smooth, thanks to the new Veteran Student Support Services (VSSS) program available at PSC.

“Everyone in the VSSS office goes out of his way to help, especially with all the paperwork that is necessary for admissions and registration,” Niedbala says. “To me, this is a friendly, family oriented place to come for advising, tutoring or just for studying between classes.”

Niedbala has maintained a 4.0 GPA during his three semesters as a full-time student.

“I have succeeded because of the support I get at VSSS,” he said.

David Smith spent 16 years serving in the U.S. Army before becoming a PSC student last May. As a pre-engineering major, he sees firsthand the importance of services such as Veterans Upward Bound (VUB), also funded by a federal TRIO grant that the college has received for several years.

“Coming from a military background into the friendly environment in VUB made college life much easier,” Smith said. “Pre-engineering has a lot of hard math, but I have access to tutors all day long. I am enjoying my experience here at the college.”

Smith plans to complete his associate degree at Pensacola State and then earn a bachelor’s in electrical engineering at the University of West Florida.

After 14 years in the Coast Guard, Matt Barker could have gone anywhere but chose Pensacola State to pursue an A.A. degree in Business before transferring to a university.

The California native said he enrolled at PSC because the student population seemed more mature and the VUB program gave him the tools to become a successful student.

“If it weren’t for the courses provided by Veterans Upward Bound, I would not be a full-time student. VUB showed me that veterans are welcome here at PSC, and I’m still benefitting from the advising, tutoring and trips that are available to veterans here.”