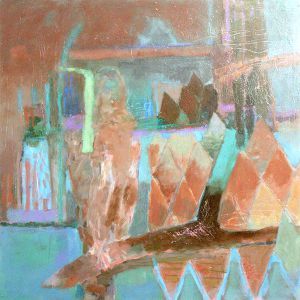 Davey and Spikes will be in attendance at an artists’ reception set for 6-8 p.m. Thursday, Sept. 19, in the Switzer Gallery, Building 15, on the College’s Pensacola campus.

North Carolina artist Mike Davey grew up in the Pensacola area and enrolled at Pensacola Junior College (now Pensacola State College) to study art after serving four years in the U.S. Air Force. He then transferred to the University of South Florida in Tampa, graduating with bachelor’s degree in fine arts in 1979.

Davey later studied filmmaking and video production at the University of West Florida, graduating in 1983 with a master’s degree in communication arts. His work in video and film production eventually took him to Durham, North Carolina, where he now lives.

Davey’s paintings in this show present an overview of his work since living in Durham. 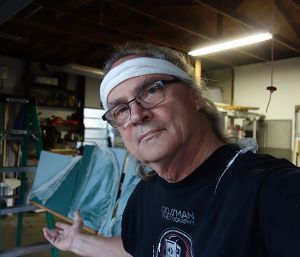 Spikes studied art and art history for two years at the Universidad de Las Americas in Mexico and at the University of West Florida where he received his bachelor’s degree in studio art in 1979. As dreams of becoming a rich and famous artist faded, a new path in creating exhibits for museums developed into a career for Spikes. Still, the process of making art persisted and is now his new day job.

Most of his latest paintings on exhibit at the Switzer Gallery are a visual recollection of adventures within the landscapes, altitudes, and attitudes of a more recent time in southwest New Mexico and northern California.

“Everything else in the show relates to the meaning of life – you don’t want to miss it,” Spikes said of the “Untitled” exhibit.

The Anna Lamar Switzer Center for Visual Arts gallery hours are 8 a.m.-9 p.m. Monday through Thursday and 8 a.m.-4 p.m. Friday. Tours are available with prior arrangements. Admission is free and open to the public.
For more information, call 850-484-2550.