Lumberjack Festival brings crowd to Milton campus – some to cut logs and throw axes, some to run through woods, others just to watch 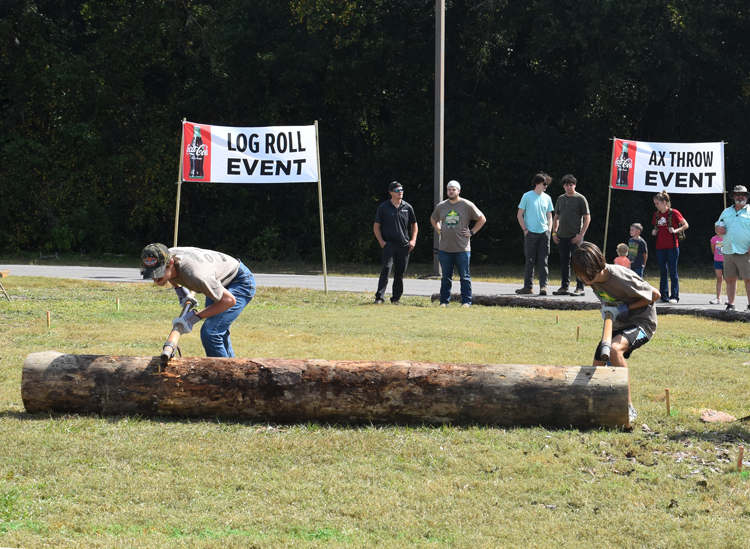 Beth and Will Stern just moved to Santa Rosa County from Wisconsin earlier this year.

“We heard about the Lumberjack Festival here and had to come out to see,’’ Beth Stern said as she and her husband walked the grounds of the Pensacola State College Milton campus on Saturday, Oct. 8, for the 33rd Annual Lumberjack Festival and Northwest Florida Forestry Conclave. “Where we’re from is real lumberjack territory.”

Hey, the Milton campus is real lumberjack territory – once a year at least.

The Lumberjack Festival featured dozens of competitors in events ranging from Axe Throw and Bow Sawing to Pole Toss and Compass and Pacing. The morning started off with the Second Annual Lumberjack Open Cross-Country Tournament, which featured boys and girls high school competition and a women’s college competition where the PSC cross-country team finished first and had four of the top five finishers, including the top three spots.

“Our team did really well,’’ said PSC Cross-County Coach Julie Burger. “I’m really proud of all of them.”

The Lumberjack Festival events were held near the track at the Milton campus. There also was a children’s area with games and face painting, arts and craft vendors and food trucks.

The second annual Lumberjack Launch disc golf tournament took place at the Milton campus on Friday. The tournament was sponsored by Flight Factory.