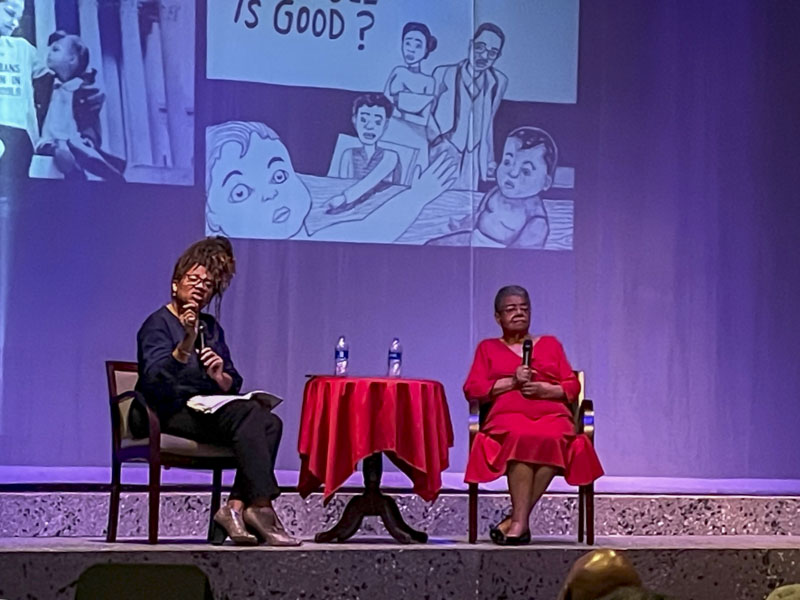 Just one year after then-Sen. John. F. Kennedy’s Pulitzer Prize-winning book “Profiles in Courage” was published, a true real-life profile in courage would emerge in the form of a teenage girl who faced violence and threats of death for just trying to go to school.

The photo of 15-year-old African American Elizabeth Eckford being yelled at and followed by a mob of angry white students on the first day of school at Little Rock Central High School in 1957 is shocking, uncomfortable and outrageous still.

The second day wasn’t any better.

“A lot of people think that the worse we faced was the mob scene on Sept. 4,’’ Eckford said to an audience at Pensacola State College. “But we were battered throughout the time we were at Central High.”

On Thursday, Oct. 4, Eckford, who turned 81 just three days earlier, spoke about her experiences before a large and appreciative crowd at Pensacola State College’s Ashmore Auditorium. The event was sponsored by the Equity Project Alliance in partnership with the Delta Iota Omega Chapter of the Alpha Kappa Alpha Sorority and the Diocese of the Central Gulf Coast.

Eckford was one of the famed “Little Rock Nine” – a group of African American students who integrated the Arkansas high school as a result of 1954’s Brown v. Board of Education Supreme Court ruling which outlawed racial segregation in public schools.

Eckford spent one year at the school, where she and other African American students were frequently targeted for abuse and ridicule. She would later be diagnosed with post-traumatic stress disorder.

She later attended Central State University in Ohio where she earned a Bachelor of Arts degree in history. She served five years in the U.S. Army.

In 2018, she wrote her autobiography, “The Worst First Day: Bullied While Desegregating Little Rock High School,’’ which was co-authored by Eckford’s friends, retired Army Lt. Col. Eurydice Stanley and Stanley’s then-15-year-old daughter Grace. Stanley has been friends with Eckford for about 20 years. Stanley, a writer, leadership trainer and motivational speaker, appeared on stage with Eckford for the PSC visit.

“(Eckford) had internalized so much of the hatred that she had heard every day at Central and it has been so heartwarming to see crowds like this one,’’ Stanley said. “It reinforces how important her message is.”

“There was separation, but not equality,’’ she said, with many in the audience murmuring in agreement.

But it was the hatred and threats of violence she encountered at Little Rock Central High that left the biggest scars.

“I had never experienced or seen violence in schools before Central High,’’ she said.

Stanley read portions of the book to the crowd and showed various slides during the presentation.

Her story truly is a profile in courage, said Lusharon Wiley, a member of the Equity Project Alliance and Vice President of Corporate Culture, Innisfree Hotels.