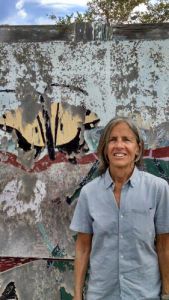 Eileen Myles is considered a trailblazer with decades of literary works that “set a bar for openness, frankness, and variability few lives could ever match.”

Myles, the author of more than 20 books including “I Must Be Living Twice: New & Selected Poems,” and the 2015 reissue of “Chelsea Girls,” will speak at 7:30 p.m. Thursday, Feb. 8, in Ashmore Fine Arts Auditorium, Building 8, on the Pensacola State College campus, 1000 College Blvd.

The writing workshop and Book Talk are both free.

Myles’ newest memoir, “Afterglow (a dog memoir)” was released in 2017 and paints a kaleidoscopic portrait of a beloved confident, a pit bull named Rosie.

Jennifer Krasinski writing for The Village Voice said: “Their exquisite slapstick tragedy, ‘Afterglow,’ is a radical memoir about and for and by their now-deceased but forever-beloved pit bull, Rosie, who the poet believes is a dead ringer for their dead father.”

A recipient of a Guggenheim Fellowship in nonfiction, the renowned poet, novelist, performer and art journalist also has been awarded an Andy Warhol/Creative Capital Arts Writers grant, four Lambda Book Awards, and the Shelley Prize from the Poetry Society of America.

In 2016, Myles received a Creative Capital grant and the Clark Prize for excellence in art writing. And poems written by and a character based on Myles appeared in seasons 2 and 3 of the Emmy-winning Amazon show, “Transparent.”

Myles has toured and read all over North America and Europe on and off since the early 1980s. Solo performances include “Leaving New York,” “Life,” and “Summer in Russia.” Currently, Myles teaches at New York University and Naropa University.