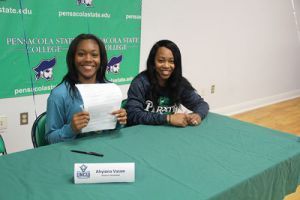 Next fall, Ahyiona Vason will trade in her Lady Pirates garb to become a Seahawk at the University of North Carolina Wilmington.

On Wednesday, Nov. 8, Vason a 5-foot 4-inch point guard, signed her Letter of Intent to play basketball at UNC Wilmington in 2018-19.

The Montgomery, Alabama, native will graduate in May with an associate degree in sports fitness and recreation management. She said she felt really at home during a September visit to the Division 1-university.

“It was pretty much how I felt when I came to Pensacola State, it felt like coming home,” said Vason, who has been bouncing a basketball since she was in elementary school.

“The coaches and other players at UNC really made me feel like I was a member of the Seahawks family. The campus was beautiful and it just felt like the place I needed to be to continue both my athletic and academic careers.”

“We can count on her to give her all during every game, at practice and in the classroom,” Jones said. “She’s also a leader on the team and serves as a mentor for our freshmen players. Ahyiona will be missed but she will be successful and a big contributor to the UNC’s Seahawks.”

During her first year at Pensacola State, Vason was a 2016-17 Panhandle Conference All-Academic Team member and received a FCSAA Scoring Team Recognition.

A 2016 graduate of Jeff Davis High School in Montgomery, Vason is the daughter of Tameka Vason.