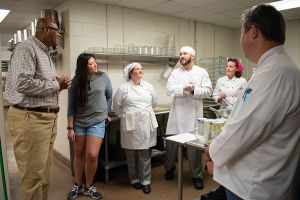 Belton: We can all agree: “No sugar in grits”

Sure, New Orleans’ Chef Kevin Belton came to Pensacola State College on Friday to cook up some of his award-winning, celebrated gumbo for the folks over at the WSRE-TV Pensacola Barn Dance Wine & Food Classic.

But that wasn’t for hours and Belton sure didn’t want to wait to eat. So the towering, big teddy bear chef – he’s 6 feet 9 inches – visited the Pensacola State College Culinary Arts kitchen in the afternoon, to see what the students were cooking up for the evening’s event.

He eyed the chopped vegetables students had prepared for the coleslaw, and watched intently as Pensacola State culinary student Brad Stimmell whisk the slaw’s dressing in large bowl.

“I came to eat,” Belton said, pulling a spoon from his left pocket, causing a few folks around to smile. “You have to be prepared. You don’t get this big not being prepared.”

Then, he dipped his spoon into the dressing, consisting of mayonnaise, vinegar, salt and some other seasoning.

“Ooh, ooh, ooh,” he said, in what must have been approval. Because, he grabbed another spoon and immediately went back for a second tasting.

Then Stimmell and fellow culinary student Amanda Thomas told Belton that the slaw would have bacon added to it. The chef’s eyes lit up, even though he might have experienced a bacon overload recently.

Belton has seen plenty of bacon in his life.

The outgoing, friendly culinary giant is a self-taught chef, whose own ancestry he describes as “a gumbo of English, French, Native American and African,” learned from his mother and grandmother in New Orleans. But he learned so much that soon, he was the teacher. For more two decades Belton has taught culinary classes as the New Orleans School of Cooking.

“It’s really intriguing to meet someone so accomplished,” Stimmell said. “It’s what we’re all shooting for.”

Belton’s visit was very casual, with random discussions breaking out between Belton, students and Pensacola State culinary instructors about topics ranging from TV tapings to what sugar does-and-does-not belong in. (The latter topic came when Belton learned that the cornbread the PSC students also were making for the Wine & Food Classic would be infused with Cuban peppers and Pepper Jack Cheese, giving it a hot, savory flavor.)

Belton said that’s fine, though he prefers a little sugar in his cornbread to make it sweet.

“I’m from Mississippi,” Verlin said. “We don’t put sugar in our cornbread. We put it in our tea.”

Belton though prefers his tea unsweetened.

“Here’s the definitive moment,” he said to Verlin.

A chorus of “No’s” came the response.

“That’s what I want to know,” Belton said, finally finding a consensus on where sugar doesn’t go.

Belton also had a message for students: