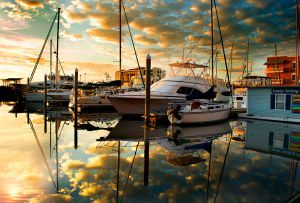 And all through February, Jaco’s will once again showcase Pensacola State College’s Photography Program, when students’ sunset-inspired photographs will be featured and displayed. The student who is chosen by Jaco’s patrons to have the best photograph wins a month-long exhibit in April.

Eight PSC photography students will showcase their sunset photos this year, beginning Feb. 1. Between them, 13 sunset photographs will be displayed.

PSC photography student Erin Perez won the contest in 2015. She now has her own wedding and maternity photo business. (Though married now, she was Erin Amis when she participated in the Jaco’s PSC Sunset Photography exhibit.)

“You hang your own pictures and learn how to stage an exhibit,” Perez said. “It was really cool, and it gives you an opportunity to get your name out there.”

Student Lisa Carver won honorable mention at the 2019 PSC Sunset Photography exhibit. Still, she was awarded $700 for her work in a PSC student show, money that came from the Jaco’s scholarship contributions.

“It helped me buy a new laptop, which I really needed,” said Carver, a second-year student. “Mine was gone and I had to use one at school.”

She said the Jaco’s exhibit was a “fantastic experience” that assisted students in other aspects of photography, such as display.

“It gave us an opportunity to learn how to present in a public space,” she explained. “It’s a lot more than just taking a photograph.”

This year, Jaco’s also will fund scholarships for incoming photography students, based on their high school portfolios.

“Our relationship with Jaco’s has always been good,” Francis said. “And it’s getting better.”

Jaco’s owner David Hambrick said the exhibit fits in perfectly with the restaurant’s ongoing monthly art series, where each month a different artist displays his or her work.

Hambrick thought it would be a good idea to turn over two months – February and April – to showcase PSC student photographers.

“It’s just fun to see the kids participate,” Hambrick said. “It’s important to them and helps them. They learn how to prepare for an exhibit at PSC, and this gives them real-world experience in that aspect. And when you see their photographs, well, they’re very talented and creative.”