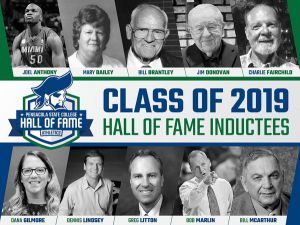 Pensacola State College will celebrate the Pirates’ rich athletic history with a ribbon cutting and induction ceremony for the ten-member inaugural class of the Pensacola State College Athletics Hall of Fame on February 16, 2019. The event will be held on the Pensacola State campus, 1000 College Blvd, Pensacola in the Hartsell Arena. An observance will take place between the women’s and men’s basketball games against Gulf Coast Community College, with a reception for inductees and their guests immediately following the end of the game. The Lady Pirates game will begin at 5:30.

“Pensacola State has a long and storied sports and athletic tradition,” said Bill Hamilton, who was the head baseball coach at Pensacola State from 1990-2010 and has since served as the College’s Athletic Director. “This Hall of Fame will stand as a reminder for all time that these awesome individuals got their start here.”

“The Hall of Fame has been a long time coming with such rich heritage,” said Hamilton.

Inductees were chosen from a long list of qualified nominees selected by a private committee comprised of athletic staff and coaches as well as other faculty members, former players and former coaches.

Inductee Dennis Lindsay was Pensacola State’s first full-time Assistant Coach. He played guard for the Baylor University basketball team and was a member of the Bears’ 1988 National Collegiate Athletic Association Tournament and 1990 National Invitation Tournament teams. Lindsay was Pensacola State’s first assistant coach from 1994-96, providing his guidance to both the women’s and men’s basketball teams. He was also the recruiting coordinator and ran the athletic dormitory, where he and his wife Becky lived during their time at the College. He joined the Houston Rockets organization in 1996, working his way up from assistant videographer to Vice President. Lindsay also served as the Vice President and General Manager of the San Antonio Spurs and has been the general manager for the Utah Jazz since 2012.

Three Pensacola State athletes who have gone on to achieve success will also be inducted:

Long-time supporters of the athletic programs at Pensacola State College round out the inaugural class:

Pensacola State College Athletics began taking nominations for the 2020 Hall of Fame class immediately following the press conference which was held on Monday, December 17 at 11 a.m. in the Donn Peery Room, Hartsell Arena on the Pensacola State College Pensacola Campus. For more information on the Hall of Fame, to see additional criteria and procedures, or to find nomination forms, visit http://athletics.pensacolastate.edu/navbar-hof or contact Shelia Nichols, Executive Director of Marketing and Communications at 850-484-1428.