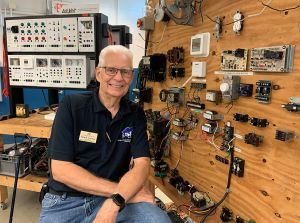 In a large, warehouse-like classroom lined with displays of pipes and fittings and gauges and fans and dials and the word “volts” on little signs everywhere, Glen Gorman steps up to the raised dais in front of a half-dozen students and manipulates a computer mouse.

On a screen in the corner of the classroom, a YouTube video begins: “Victaulic Style 89 Coupling Installation Instructions.”

Perhaps coupling installation instructions aren’t everyone’s cup of tea, but for students in Pensacola State’s heating, ventilation and air conditioning program, they are among the vital steps in achieving a workforce certificate and a potential job and a secure future.

Guiding the students along these steps is Gorman, 78, who brings a half-century of HVAC experience to his instruction, which he has been providing to PSC students for the past eight years. He will retire in December.

“I love this job,” he says. “I wish I could have done this many, many years ago.”

In those eight years Gorman has sent many new HVAC technicians into the world. Three of his former students, in fact, currently work for the College.
“Seeing the new students come in, not having a clue what they’re getting ready to learn, and then realizing at the end how much they have learned and telling me what they’ve learned, wow, that’s my payoff. Not only have they learned it, but they’ve become successful and now have jobs in the field.”

Michael Listau, Director of Workforce Education, says, “Glen has shown outstanding adversity in dealing with the COVID-19 pandemic and has been dedicated to his work and his students. Glen is in the ‘at-risk’ category because of his age and various health issues, but he has refused to stay home. I can’t talk Glen out of not coming to work no matter how hard I try!”

Teaching HVAC, of course, is not without its challenges, particularly in a technical industry in which evolution occurs at a breakneck pace.

“From 1968 to ’88, there was very little change,” Gorman says. “Then the EPA got involved, and from then on you had changes almost on a yearly basis. Refrigerant changes, more efficient motors and compressors and just basic changes in performance and efficiency. Keeping up with all that, understanding how all this new equipment works, is a challenge.”

“I have a lot of acquaintances I’ve made over the years, pros that come in as guest speakers and other relationships with companies who offer seminars or webinars or other assistance. Also, wholesale houses will supply us with new equipment that’s damaged or otherwise unsellable for some reason. That gives us valuable equipment to use in the classroom.”

Born in Philadelphia, Gorman grew up in New Jersey, where he studied electronics in trade school during his high school years. He joined the U.S. Navy after high school, working as an aviation electrician. After leaving the Navy, he worked for about two years as an air traffic controller for the National Aviation Federal Experimental Center.

He then moved to Atlanta where he lived for the next 45 years. “I really consider myself an Atlanta native,” he says. In Atlanta, he began working as an auto mechanic, which led to a gig installing air conditioners at a Volkswagen dealership.

“I learned enough to put the ACs in the cars and put refrigerant in and all that, but that was enough to get me interested in the field,” Gorman says. “I decided I really wanted to learn more about it, so I asked a friend who worked for an air conditioning company if I could get a job.”

He was offered a job with the Marietta, Georgia, company as a helper, but soon the owner of the company made an offer: He would pay for Gorman’s training as an AC technician, but he would have to take classes at night while working during the day.

“That was a big challenge,” Gorman says. “I worked for him from 7 in the morning to 5 at night, then at 5:30 I went to school. That was for two years, five nights a week. When I got out of school and got my certificate, my boss said, ‘I have a present for you.’ It was a brand-new truck with Number 1 on it and my name on the door.” 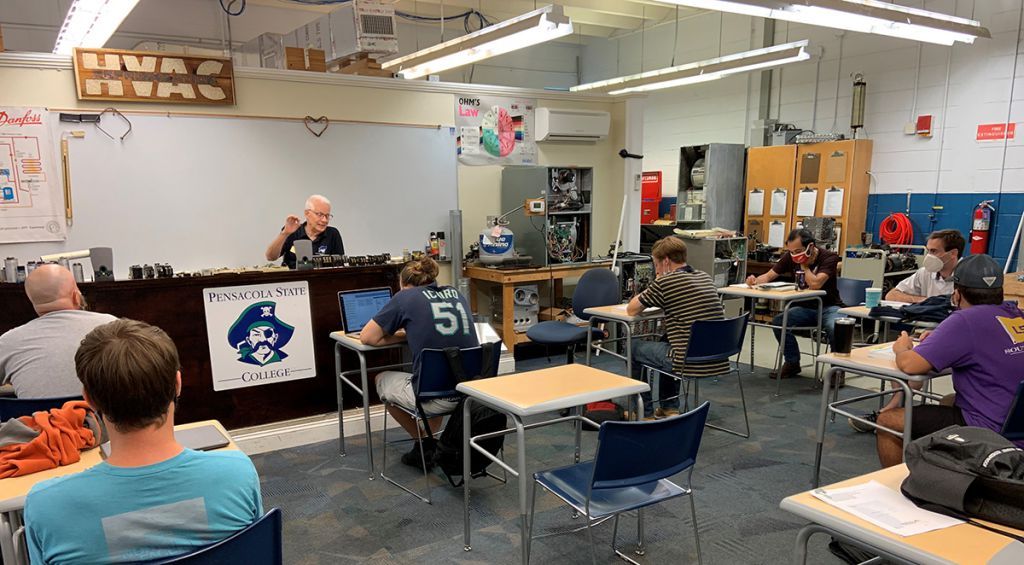 Gorman stayed with that company for about two years, then switched over to the commercial side of HVAC – “I wanted something more steady” – until 1975, when he went to work for Six Flags Over Georgia in the refrigeration department.

“It was mostly working on ice-making machines,” he says. “We made 64 tons of ice a day. You can only imagine the number of drinks using that ice.”

After Six Flags, Gorman went to work as a facilities superintendent for the Federal Reserve Bank in Atlanta. It was there, dealing with all aspects of building maintenance, that Gorman got his first taste of teaching.

“Two days a week I would take my 31-person staff and teach them on the different aspects of the bank that we’d have to work on. I’d teach electrical one day and I might teach refrigeration the next. I did that for about seven or eight years. I had no problems standing in front of a group talking about anything. In fact, I didn’t even realize I was actually teaching.”

After retiring from the Federal Reserve Bank, he and his wife moved to Pensacola, where he worked in facilities for United Cerebral Palsy. His boss at the organization had a friend who was trades director at Fortis Institute and needed an HVAC instructor. Gorman took the job and taught at Fortis for a year and a half before learning of an opening at PSC for an adjunct instructor.

After about a year and a half, Gorman applied for a full-time faculty position, which he’s held ever since.

Listau says, “With more than 45 years of industry experience in the HVAC industry, Glen has the depth and scope of knowledge that truly allows him to be called an expert in his field. With his caring and professional demeanor, his students are given the necessary instruction in a fashion that will allow them to succeed in their field.”

“In this job you deal with so many different kinds of people from different backgrounds,” Gorman says. “Some of them may be from a different country. I actually had a deaf student in the program once. We had to have someone come in and sign for him. Signing the technical terms is very difficult. I actually learned a little sign language myself. That student got a job in California and is doing very well in the air conditioning field. It was a great challenge and a great success story.”

His next challenge, he says, is going to be retirement.

“I’m used to getting up every morning at 5 and being here at 6:30. According to my wife, I never leave my work at work. I’ve got to find something new to talk about. I’m sure my wife can find things for me to do.”