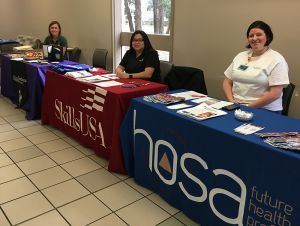 Think you have mad skills? (If the young folks don’t say “mad skills” any longer, we apologize.)

Put that confidence to the test by joining SkillsUSA, a national organization that serves career and technical students.

But bring your “A” game, because Pensacola State College’s SkillsUSA teams competes – and succeeds – on a national level.

SkillsUSA is one of three PSC Career and Technical Education (CTE) student organizations that are showcasing their achievements and services during February’s National CTE Month. All three groups – SkillsUSA, National Technical Honor Society, HOSA-Future Health Professionals — have been setting up booths and offering information and assorted goodies to interested students throughout the week.

She originally joined HOSA because, she said, “it looks good on a resume.”

But then Weeks discovered other benefits that the organization offers, including chances to grow in several disciplines, including leadership, public speaking and field-appropriate study information that she has yet to cover in her classroom work.

“I’ve been able to get ahead and learn things that we won’t cover until next semester,” Weeks said. “(The Vet Tech program) is very hard. But I enjoy it.”

Nearby, at the National Technical Honor Society table, advisor Sydney Smart worked to recruit top CTE students who might qualify for membership.

In September, the PSC chapter inducted 49 students into the organization, which has awarded more than $2 million in scholarships since its inception in 1984.

To qualify, students must have a minimum CPA of 3.0 and be enrolled in a CTE program.

“There are students who qualify who might not be aware,” Smart said. “We’re trying to get as many students as possible to receive that recognition for their achievements.”

Theresa Hoang, SkillsUSA’s recruiter at the Warrington showcase, said the organization offers CTE students to compete against others to access their talents against others in the region, state and nation.

“We have always performed well,” said Hoang, who works in Student and Program Outreach. “We always send 10 to 15 students to nationals.”

At the 2019 national SkillsUSA competition in June, six PSC students placed in the top 10 in their contests.
“We want students to get out there and participate,” Hoang said. “We want them to have the chance to win prizes and scholarships.”

PHOTO: Left to right: Sydney Smart, Theresa Hoang and Emily Weeks offer information on CTE organization during a visit to the Warrington campus.