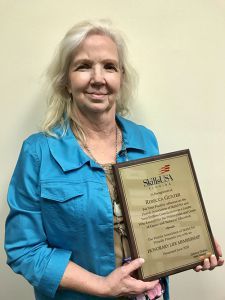 For almost a decade, Rebecca Gunter has been a part of Pensacola State College’s SkillsUSA program.

This year, Gunter’s countless hours of dedication to the College’s SkillsUSA chapter, along with the regional, state and national programs, have earned her the SkillsUSA Florida Honorary Life Membership Award.

The Honorary Life Membership Award is the highest honor SkillsUSA bestows and is reserved for those who dedicate service to the organization over a long period of time. Recipients receive a plaque, and their name is recorded in SkillsUSA Florida’s official history.

“I feel quite honored that the board of directors of SkillsUSA Florida would select me to receive the Honorary Life Membership Award,” said Gunter, an office assistant in the College’s Student and Program Outreach Department.

“In 2012, Jennifer Ponson hired me part-time to assist her office with the preparations, coordination and logistics for the SkillsUSA Florida State Leadership and Skills Conference hosted for the first time by Pensacola State College.”

Ponson, the College’s coordinator of Student and Program Outreach and the SkillsUSA Florida Region 1 coordinator, said the honor is well-deserved.

“Rebecca is an integral part of the success of our SkillsUSA program and has been instrumental in the successes of the state conferences that PSC has hosted,” she added.

Pensacola State hosted the SkillsUSA Florida 2012, 2013 and 2014 and 2018 and 2019 conferences at the Pensacola Bay Center in Pensacola. The 2020 state conference was cancelled because of the COVID-19 pandemic. However Gunter had worked alongside Ponson preparing for the event up until the cancellation.

“Once Jennifer introduced me to world of SkillsUSA, I was so proud to be affiliated with the organization,” she said. “I really appreciate the many opportunities that it provides our students ─ helping them achieve their career and life goals.”

Gunter’s devotion to SkillsUSA goes far beyond the state conferences. She assists Ponson, who also is the secretary/treasurer of the SkillsUSA Florida Board of Directors, with preparing the official minutes of annual meetings. And Gunter has been instrumental with the successes of the Worlds of Possibilities Career Expo, which introduced Northwest Florida middle school students to skilled and technical careers.

In the Honorary Life Membership Award announcement, SkillsUSA Florida officials described Gunter as a positive influence on the organization.

“Rebecca is known for her organization, commitment and attention to detail. She is loyal and a true champion, always willing to pitch in for the good of SkillsUSA,” the announcement said.

“… She has served the organization for 10 years and has been instrumental to the success of our State Leadership and Skills Conference. Rebecca truly exemplifies our mission and supports SkillsUSA Florida in any way she can.”

Gunter’s history with Pensacola State goes back more than 20 years. In 2000, she was hired by Ponson as an administrative assistant in the Continuing Education Department on the Warrington campus.

“When that department was dissolved on the Warrington campus, I worked in the Dental Clinic. After that, I worked for the Marketing Department and the Visual Arts Department before leaving the College in December 2005,” Gunter said.

Gunter and her husband, Larry, have two adult sons, Nick and Chris; a dog, Gracie; and several cats. The couple lives in Gulf Breeze.