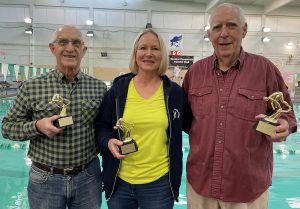 Three team members also were the overall winners in their age groups.

The team is coached by Chris Barfield. The swim classes that team members participate in are run by PSC Aquatic Center Coordinator Kay Miller.

“We were a smaller team – we only had nine swimmers compete,” Miller said. “I’m really proud. They did great.”

“I really didn’t start (serious swimming) until later in life,” Duff said. “I was in my 40s. But it’s so much fun, and it’s fun being part of a team.”

Evans is the long-distance specialist on the team.

As for himself, Ascherfeld, the oldest member of the Gulf Coast Pirate Swim Team keeps going and going as well.

“I’ve been swimming for a long time,” he said. “It makes you feel young and it keeps your mind young. You’re tired when you get out, but if you don’t do it, you’ll feel it later in the day. Swimming energizes you.”

For information on the PSC Aquatic Center including pool hours and various classes and programs, go to https://www.pensacolastate.edu/current-students/student-services/aquatics/.