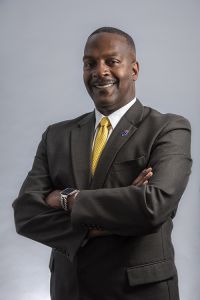 Pensacola State’s own Rob Gregg was elected president of the National Association of Veterans Upward Bound (NAVUB) in March.

The organization is part of the federal TRIO programs and funded through the U.S. Department of Education. Veterans Upward Bound projects, supported by NAVUB, are dedicated to developing the potential of all U.S. military veterans.

Gregg, who is Pensacola State’s VUB director, also will speak at the 6th Annual Florida Women Veterans Conference set for 8 a.m.-4 p.m. June 10-11 at the University of West Florida.

This year’s theme is “Women Veterans … We Are One of Many” and the event will be held in the Conference Center, Bldg. 22, on the UWF campus.

At Pensacola State, Gregg and his staff help prepare eligible veterans to enter and successfully complete college. A veteran himself, Gregg retired as a lead chief petty officer after serving 24 years in the U.S. Navy.

Before becoming VUB director in 2015, Gregg was the College’s coordinator of Institutional Research for seven years. In 2011, he earned a certificate in institutional research from Florida State University.

The award recognizes excellence in leadership involving people, events, programs, projects and/or teams. It is presented annually to a GCVAC member and volunteer who demonstrate leadership qualities such as being an excellent role model, inspiring others to work collaboratively and creatively, demonstrating initiative, fostering pride in GCVAC and promoting a work environment that is respectful, collegial and supportive.

A U.S. Air Force officer, aviator and veteran of World War II, Korean War and Vietnam War, Bud Day was a prisoner of war and recipient of the Medal of Honor and Air Force Cross. He died in July 2013 and is buried in Barrancas National Cemetery at NAS Pensacola.

Currently, Gregg is the Florida State Director for the GCVAC, but also has served as president of the Pensacola State College chapter of Association of Florida Colleges. He also mentors a middle school student through the “Take Stock in Children” program.