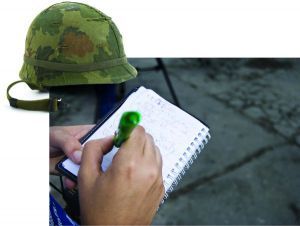 The award-winning black comedy, “How I Got That Story,” is onstage at Pensacola State College May 18 through 21 at the Ashmore Fine Arts Auditorium, Building 8, on the Pensacola campus, 1000 College Blvd.

Show times are 7:30 p.m., for Thursday, Friday and Saturday performances and 2:30 p.m., for the Sunday matinee.

As part of the college’s yearlong Vietnam War Memory Project, “How I Got That Story” is set in wartime Ambo Land (Vietnam). The story revolves around a naive young reporter from Dubuque who encounters some 21 characters, including several anxious to cover the war in all its aspects.

The reporter plunges into the surreal madhouse of war, interviewing foul-mouthed G.I.s, the sinister lady ruler of the country, a Buddhist monk and many more in a brilliant kaleidoscope of interlocking scenes.

Winner of the Obie Award, this stunningly original comedy by Amlin Gray sums up the incongruity and tragedy of the United States’ experience in Vietnam.

Purchase tickets online at www.pensacolastate.edu/lyceum or by calling the Lyceum Box Office at 850-484-1847. Tickets are also available at the door one hour before a performance.