From ‘Miss Fury’ to ‘Wonder Woman’ and beyond: PSC presents ‘Female Superheroes’ discussion 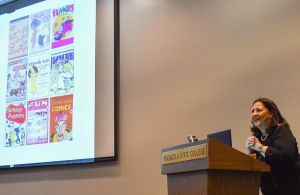 Statistics show that in the 1940s, girls were as likely to read comic books as boys.

But there was a difference, said retired educator Magdalena Lamarre.

Today, females in comic books are often the heroes, battling evil and fighting for virtue, equality and liberty. But the road to superhero gender equality has been a fitful evolution, filled with detours, controversy and at times episodes of de-evolution where female strength was subdued.

Lamarre, a retired humanities and social sciences professor at Miami Dade College, has been a fan of comics since childhood. But she said the impact of comics and their characters go far beyond childhood imagination.

“They have a stigma,” Lamarre said during the lecture at Pensacola State College’s Hagler Auditorium on Feb. 27, the day before the opening of Pensacon, Pensacola’s popular comic fan convention. “People who are into comics must be dumb. But comics are part of who we are, and they are an art form. They look to the future. You can learn about science, and geography and mathematical equations.”

You can also learn about the role of women in society at a specific time by their portrayal in comics, she said.

Early romance comics aimed at girls, Lamarre said, featured titles “like ‘Nellie the Nurse,’ ‘Tessie the Typist’ and things like that.”

“What was their goal?” she asked audience members. “For ‘Nellie’ the nurse, it’s to marry a doctor.”

For Tessie, the goal was to marry a “lawyer or business executive.”

“Comics reinforced behaviors and attitudes of the day,” Lamarre said. “It was about romance and getting married and having children. This was your goal.”

But even in the late 1930s and 1940s, there were bright spots for women superheroes, from the star-spangled “Pat Patriot” to Nazi-fighting “Miss Fury,” which was created by June Tarpe Mills, one of the few women in the comic business in the 1940s and 1950s.

“Miss Fury” is the inspiration for Marvel Comics superhero Hellcat.

There was a “sexualization” of many female superheroes, though many became icons for women looking for powerful role models. None were more successful than Wonder Woman.

“Wonder Woman” debuted in 1941. The character was on the first cover of feminist icon Gloria Steinem’s “Ms.” Magazine, which debuted in 1972. And Wonder Woman also was depicted on the magazine’s 40th anniversary cover.

“They accused her of being a feminist,” Lamarre said of Wonder Woman. “And she was.”