Free theatrical production of ‘The Mountaintop’ at PSC May 25 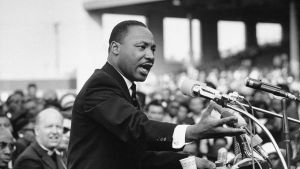 Pensacola State College presents “The Mountaintop” by playwright Katori Hall at 7:30 p.m., Thursday, May 25, at the Ashmore Fine Arts Auditorium, Building 8, on the Pensacola campus.

The public is welcome to this free performance. Doors open at 7 p.m.

“The Mountaintop” is a fictional depiction of the Rev. Martin Luther King Jr.’s last night on earth set entirely in Room 306 of the Lorraine Motel on the eve of his assassination in 1968.

After giving a speech to a Memphis church congregation during the sanitation workers’ strike, Dr. King retires to his motel room. When a mysterious young hotel maid comes to visit him during the night, Dr. King is forced to confront his mortality and the future of his people.

The event is sponsored by the PSC Black History/Multicultural Committee and “The Mountaintop” is presented by special arrangement with Dramatists Play Service, Inc., New York.

For more information, contact the PSC Office of Institutional Diversity at 850-484-1759.