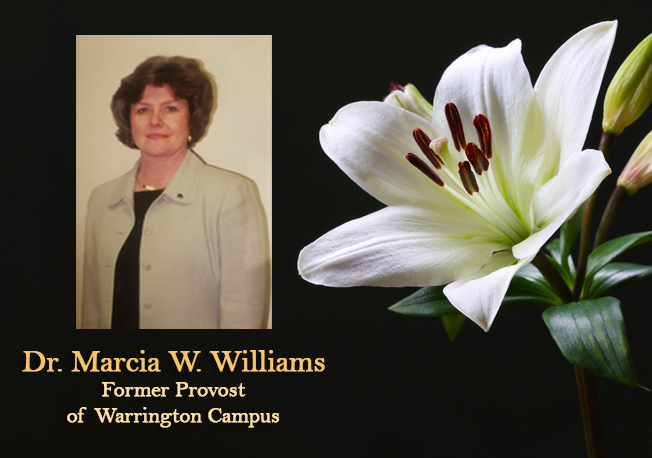 Just because you’re a serious worker doing serious work doesn’t mean that you have to be dry, boring or reserved.

Because Dr. Marcia Williams, former Provost of the Warrington campus, could be either the “life or the party,’’ as she was described in her obituary, or the lifeblood of a department, program or campus.

Williams passed away unexpectedly on May 25 after suffering a stroke. She was 71.

“Marcia was smart, straightforward and very kindhearted,’’ said her friend Lisa Payne, recently retired Executive Assistant to Dusti Sluder, Dean of Health Sciences. “She had a very spirited personality and was witty with an infectious laugh. Laugher was always present with Marcia. She will be greatly missed by many.”

Born in Alabama but raised in Pensacola, Williams was a respiratory therapist who worked her way to become a leading visionary at PSC. She developed the medical program at the campus and designed the “virtual hospital” into building plans in 2001, which led to the establishment of the Mary Ekdahl Smart Center for Patient Simulation in 2006.

She also was the College’s Director of Staff Development and In-service Training from 1992 to 1997, and at one point was the adviser for the PSC basketball cheerleaders.

She became Warrington Provost in 1997, serving in the position until her retirement in January 2010.

Williams graduated from Woodham High School. She earned college degrees from online programs and the University of West Florida and earned her doctorate in education from the University of Southern Mississippi.

But despite her impressive credentials, work ethic and skill, she was still a fun person to be around, said Tammy Henderson, Director of Human Resources.

“She was very bubbly,’’ Henderson said. “You would know she was in the room, because she just had that kind of personality. But she also cared deeply about what her job and responsibilities. She was just a really good person all around.”

Williams is survived by her son, Joseph Williams, and a granddaughter, Jessica Williams, as well as three siblings and other family members, her boyfriend David Dillashaw and her dog Bailey.  Funeral services were held May 28 at Pensacola Memorial Gardens.