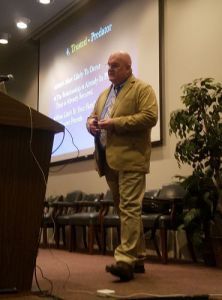 Many parents warn their children about “stranger danger.” However, former law officer Chris Wilkinson says stranger danger should not be the only concern.

In an eye-opening presentation on March 13 at Hagler Auditorium, Wilkinson went into detail about the dangers children face today ─ especially on the internet.

Wilkinson, a former Pensacola Police Officer and Internet Safety Trainer and Advocate, was the featured speaker during Campus Safety Month 2018. During his presentation, he listed what he considers the Top 5 threats to youth:

No. 5: Online predators who are strangers

“Parents should treat their computer as if it were as dangerous as a gun. If it’s not secure, then it places a child in harm’s way,” he said. “Computers give children access to the world, but they also give the world access to the children who use them.”

He noted that predators use social networking sites and apps like Kik, MeetMe, Snapchat and Craigslist to connect with young people. He said these predators often pose as teenagers to lure children into meeting them for sex or possible abduction.

No. 4: Online predators who are not strangers

“People with whom the child has a trusting relationship comprise 80 percent to 90 percent of all molestation cases,” Wilkinson said.

He stressed the importance of talking to children about recognizing inappropriate behaviors and keeping the lines of communication open.

“There is no such thing as the one-time ‘sex talk’ anymore,” he added.

No. 3: Child pornography is not “just pictures”

He reminded attendees these photos depict the rape of children.

“Those who access child pornography will wind up on police radar, however limited resources only allow officers to pursue ‘the worst of the worst,’ ” he said. “It can sometimes take as long as six months from the time the offender is discovered until tracking and warrants produce an arrest, which only happens to about 2 percent of those who seek out child pornography.”

No. 2: Sexting, the exchange of “nudes” or risqué photographs

“As early as middle school, most children have had some encounter with sexting and cyberbullying, which is often used as a tactic to solicit those photos,” Wilkinson said. “Young people do not need a cellphone of their own to access sites that allow the exchange of inappropriate photos and requests for these photos.”

He said many use friends’ cellphones without their parents’ knowledge. He added some photos are accompanied by GPS data, which gives access to a child’s location.

“Modern pornography is easily accessible, appears in unexpected places and is often ‘graphic, explicit and deviant.’ The largest consumer group of pornography users range in age from 12-17, with 11 being the average age of first exposure,” Wilkinson said.

He added youth are being groomed and desensitized.

He suggested parents get involved with their children’s cyber network, monitor their behavior and keep the lines of communication open.

“Take their cell phones after 10 p.m., turn off the modem and look into parental software, and if you see something, say something,” he urged.

More information on protecting children can be found at www.enough.org and www.netsmartz.org. 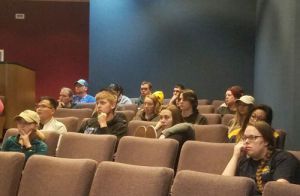