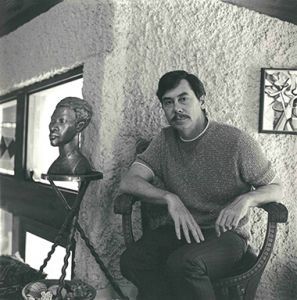 When Carl Duke retired as the head of Pensacola State’s visual arts department in 1987, a part of his heart remained at the College.

More than 400 pieces were donated to Pensacola State with the stipulation the artwork be used to help visual arts students further their education. Much of the collection is artwork created by Duke; however the bequest also includes pieces he and his late wife, Jo Lynn, acquired during their travels and other pieces given to the couple.

“This summer, we were notified that Mr. Duke had left a large collection of his artwork to the College,” said Andrea Krieger, executive director of the PSC Foundation. “The donation consists of paintings, ceramics, pottery, wood pieces, and collectibles from Mr. Duke’s extensive travel – it’s a really diverse collection of artwork.” 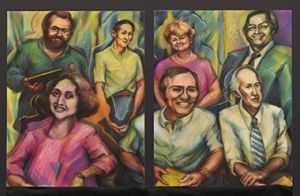 Known for his ceramic pottery, Clover worked at Pensacola State from 1966 until his death on May 7. He was the longest-serving faculty member ─ having spent nearly 52 years at the College.

Duke, who worked at the College from 1957-1987, hired Clover and the two became lifelong friends. Throughout their lives, the two men often exchanged and gifted each other pieces of art. Many of the items in the auction include artwork that Clover gave to Duke.

Allan Peterson, chairman of the College’s visual arts department from 1985-2005, described Duke as a visionary, and a teacher who drew students to his classes and influenced local artists who passed through the department.

“Carl Duke was the person who hired the original faculty of a small art department then housed in the music and theater area. Though no one may remain of that original few, it should be remembered that Carl had the expectations for the development of the art department,” Peterson said.

“He was the mover behind the creation of the original visual arts complex in its current location. … It was Carl who wanted to augment the department offerings with exhibitions and eventually got a position for a full-time gallery director. He hired me, in 1974, to develop a professional gallery program. That was visionary in those days for a junior college.”

Krieger added that even the College’s Anna Lamar Switzer Center for Visual Arts was the brainchild of Duke.

“The facility was his architectural vision – even down to the stucco on the exterior,” she said of the modular complex of buildings that were completed in 1970. Renovations to the facility were finished in 2002, and the 11,000-square-foot Charles W. Lamar Studio addition was completed in 2017.

A graduate of the Art Institute of Chicago, Duke earned his Bachelor of Fine Arts degree in 1954 and Master of Fine Arts in 1956. His artwork has been exhibited in the Smithsonian Institution, Denver Museum, Birmingham Museum of Art, the former Isaac Delgado Museum of Art (now the New Orleans Museum of Art), Daytona Beach Art Center and others.

He was the featured artist in One Man Shows at Pensacola Junior College, Pensacola Art Center, Henri Studio in Boston and Madison-Art Directions Gallery in New York.