For Institutional Research Director Michael Johnston, it’s all about ‘loving the data’ 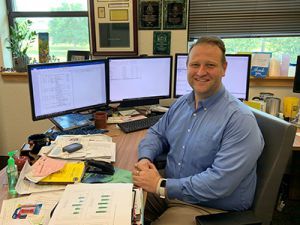 The whiteboard in Michael Johnston’s office is covered with equations and graphs and charts and statements and boxes around equations and asterisks by equations.

But while it looks, to the layman, very much like a clever prop from “A Beautiful Mind,” it’s a source of joy to Johnston, whose face fills with glee as he describes the chaos of scribbles.

“I love modeling, modeling is a big part of what we do,” Johnston says, pointing to his handiwork on the whiteboard.

“Being able to take a scenario and develop a probability scheme to determine the likelihood of something happening, that to me is great. That is as close to fortune telling as you’re ever going to get.”

Johnston, 37, is PSC’s executive director of the Institutional Research Department, as well as the College’s State and Federal Reports Coordinator. He has been referred to, lovingly, as PSC’s “Data Guy.”

Yes, Johnston crunches numbers, but he quickly points out that, “Data is not always numbers. I love data, because data tells stories in a unique way that removes all passion and any relativity.”

A lack of passion and relativity, however, does not mean a lack of fun, not when the data comes from Johnston.

“I can bring a little bit of experience in a lot of different fields, which makes it a lot easier for those as not as familiar with numbers to become acquainted and to start loving the data,” he says. “Otherwise it can be really intimidating.”

He prides himself on being able to tailor the results of his research to the person requesting it.

In the three years since he helped launch the Institutional Research Department, Johnston has worked with departments throughout the College.

“From fundraising to athletics to student affairs to academics, the data is everywhere, and it’s so impressive to be able to take all these different data sets and unite them and then make sense of them and understand the etiology and then the structure behind them,” Johnston says.

“Michael loves PSC,” says PSC President Ed Meadows. “He loves our students, he’s a very caring person. He helped lead the charge for a Virtual Tutoring Program that became a national Bellwether recognized program. He sees the need for our data to represent the institution in a correct way. He’s helped us in a lot of ways, such as where data is tied to budgeting, tied to appropriations, funding allocations, helping to make sure that the College is getting its fair share. We place a lot of confidence in the office of institutional research to make sure the data we submit is correct, so we can optimize our finding from the different state sources and the federal government.”

A native of Canada, Johnston moved with his family to Stuart, Florida, when he was 7. He went to public high school in Stuart, getting his first job at a local pharmacy when he was 17. Throughout his educational career he continued working at different pharmacies, learning both the trade and the business.

Johnston attended the University of Miami, where he was determined to find an engineering program that suited his tastes.

He passed on environmental engineering, however, when “I found out it’s all wastewater treatment.”

He switched to civil engineering but said no thanks after too many semesters in the sun making concrete.

He settled on a mechanical engineering degree and got a job with the Miami Project to Cure Paralysis.

As it turned out, Johnston soon realized he didn’t like being an engineer, environmental, civil or mechanical.

“I was too siloed,” he says. “I was in a cubicle, with little interaction with people and I like working with people.” He moved to Pensacola, a place he had visited before and which “reminded me of how Stuart used to be.”

He was an adjunct instructor at both the University of West Florida and PSC and received his master’s in statistics at UWF. He also was offered the opportunity to teach at the college of pharmacy at Florida A&M University in Tallahassee.

“So, I bounced around a little bit,” Johnston says. “I had the opportunity to come here to PSC about three years ago when they wanted to start an institutional research department independent of all the other departments.”

The College had a serious need for such a department, Meadows says.

“It verifies the data for required submissions of data turned in to the federal government,” he says. “Michael and his staff are very diligent in making sure the data is correct. Over the last several years, because of the focus on performance funding, it’s important that we get the right data sets for the right students in the right categories. Michael and his staff are invaluable to the college because of this.” 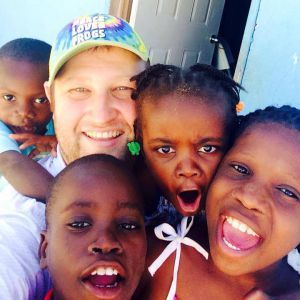 Michael Johston poses with a group of children at an orphanage in Haiti.

Johnston also is a devoted volunteer, on an international scale. Adorning his office wall, as well as his social media profiles, are photos of him sharing a happy time with a group of orphans at an orphanage/clinic in Haiti that he visits whenever possible.

“I love doing international work,” Johnston says. “Some people can do a great job at vacationing. I can’t. I can’t just go sit on the beach somewhere and be happy.”

His volunteerism led him to Pensacola’s Health and Hope Clinic, where he oversees the pharmacies and mentors pharmacy students. He also uses his pharmaceutical contacts to obtain inexpensive medicines that he sends to clinics around the world. He spends several hours a day before and after his PSC workday at Health and Hope.

“I love being able to help others,” Johnston says.

That love for helping extends to his PSC duties.

“Not everyone majored in statistics,” Johnston says. “So I want them to understand the data I present, and if I’m presenting in a way that doesn’t make sense to them, I don’t want to offend them or intimidate them, I want to make sure it works for them.”