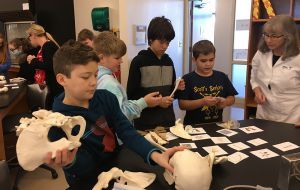 Exploring one of the ponds at the picturesque Pensacola State College South Santa Rosa Center, young Cameron Sanchez made a discovery:

“I found a living organism in the pond,” 11-year-old Cameron said.

“There,” he said, pointing to a brown leaf floating on the pond’s surface.

But a classmate pointed out, the leaf is now dead.

“I found a dead organism in the pond then,” Cameron said. “It’s probably got living organisms on it.”

And, well, he got his shoes a little muddy on the pond bank. But it’s all for science!

Seth was one of about 60 Holley-Navarre Intermediate fifth-graders from three different classes who visited the South Santa Rosa Center on Friday, Feb. 7. Holley-Navarre Intermediate School has 15 fifth-grade classes, and the other classes will visit the South Santa Rosa Center each Friday through February, as well as March 27.

Kaylin Smith, 10, stood with a clipboard, filling out information about the pond – temperature, clarity of water, observation of organisms – on the cold, brisk day.

The temperature of the water?

Students also went inside classrooms at the South Santa Rosa Center to identify bone pieces and assemble a skeleton and studied pond organisms under microscopes.

“This is anatomy and what our students do here is they learn about the human body,” PSC Biology Professor Liz Yelverton told a group of fifth graders. “Today, we’re going to be learning about bones.”

She then told the students to look in the drawers marked “bone drawers” and pulled out bone pieces to match with pictures they were given.

“I hope the students take away a sense of excitement about all this cool stuff,” Yelverton said. “And I hope it inspires them to go to college someday. Maybe Pensacola State. We’re already marketing!”

Mitzie Sowell, PSC Allied Health Department head, said the visits are a good way to expose the young students to science – and the mission of Pensacola State College.

“So many people don’t know this campus is even here,” Sowell said. “We have students coming, teachers coming and parents coming on these field trips. It’s a good opportunity to introduce them to PSC.”